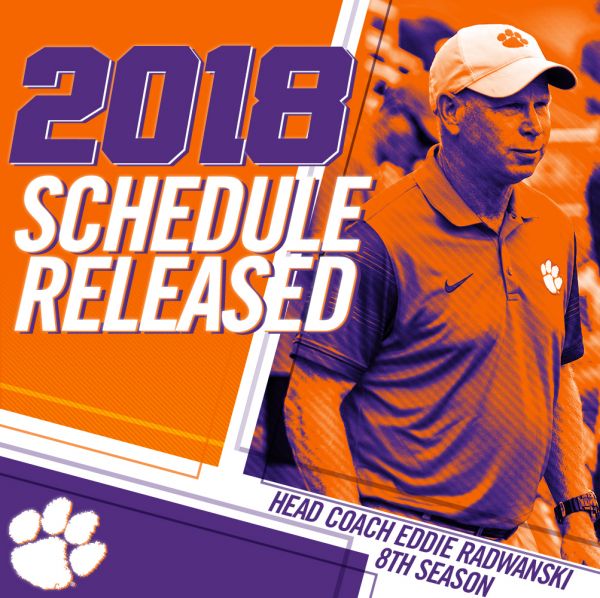 CLEMSON, S.C. – The Clemson women’s soccer program announced its 2018 slate of matches on Wednesday. The schedule includes nine contests at Historic Riggs Field and eight on the road against a total of seven opponents that played in the NCAA Tournament in 2017. In addition to the 17 regular season matches, the Tigers have two preseason exhibitions at home at Riggs, Auburn on Aug. 8 and Furman on Aug. 11.

“Once again, we look forward to a challenging schedule for 2018,” said head coach Eddie Radwanski, who is entering his eighth season leading the Tigers. “A schedule of games with teams from the Pac-12, Big Ten, Big 12, the AAC and the SEC will prepare us well for our Atlantic Coast Conference matches. We have two very good home preseason matches with Auburn and Furman that will be a good test before our West Coast trip. The remaining non-conference home matches versus Indiana, Liberty, an exciting First Friday contest versus Villanova and a game with 2016 National Finalist West Virginia will give our fans a lot to look forward to, before the ACC season even begins!”

The Tigers open the regular season on the road at Oregon State on Aug. 17 and turn around to play Oregon two days later. Their third match is also on the road, as they renew their annual rivalry with South Carolina on Aug. 23 in Columbia. Clemson’s first home match of the season falls on Aug. 26, when the Tigers are set to play Indiana.

The Tigers’ road schedule is highlighted by another two-match road trip on Oct. 4 and Oct. 7, when they face Florida State and Pitt, respectively. Clemson also travels to league foes Wake Forest (Oct. 18), Virginia Tech (Oct. 21) and Syracuse, for the regular season finale on Oct. 25.