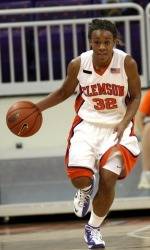 CLEMSON, SC – The Clemson women’s basketball team (10-16, 3-8 ACC) will hold its Solid Orange game on Sunday afternoon as the Georgia Tech Yellow Jackets come to town. Tip-off is slated for 2:00 pm at Littlejohn Coliseum. The Yellow Jackets (19-7, 5-6 ACC) won match-up between the two schools earlier this season in Atlanta, GA.

The game will be video streamed on www.ACCSelect.com while livestats will also be available by accessing the Clemson Athletic Homepage. Fans can also follow the action with Don Munson and Kanetra Queen on the Clemson Tigers Sports Network.

Scouting Yellow Jackets Georgia Tech will be looking for its 20th win of the season on Sunday afternoon as the Yellow Jackest boast a 19-7 record for the year. Tech will also be looking to get back to .500 in conference play after dropping its last three ACC games for a 5-6 ledger.

Janie Mitchell leads three double-figure scorers for the Yellow Jackets, averaging 16.8 points per game. The senior forward is also the team’s leading rebounder with a 5.5 average. Chioma Nnamaka and Alex Montgomery then boast scoring figures of 15.2 and 11.4 points per game, respectively.

Overall, Georgia Tech is posting 70.2 points per game and winning games by just over 10 per contest. The Yellow Jackets are also out-rebounding their opponents by three boards per game while shooting 41.4-percent from the field.

Christy Brown – tallied 11 assists in two games last season with just six total points; had eight points and two steals in January match-up. Morganne Campbell – had four points in both meetings in 2006-07 with just 25 total minutes of action against the Yellow Jackets; scored 10 points on 4-of-8 shooting with five rebounds earlier this season. Moreemi Davis – averaging 5.2 points and 2.8 rebounds in five career games against Georgia Tech Lele Hardy – posted 19 points in first meeting of 2006-07 at Clemson and then had 10 in Atlanta later in the season. Had a double-double in January with 15 points and 10 rebounds; Averaging 8.0 rebounds in three games versus the Yellow Jackets. Whitney Hood – did score in January game but had three rebounds and a pair of steals. D’Lesha Lloyd – owns a 9.4 scoring average in seven games against Georgia Tech while averaging 2.4 rebounds in those contests. April Parker – Had one rebound and two blocked shots in seven minutes of play earlier this season. Jasmine Tate – Played seven minutes in earlier game with an assist and a steal. Stefany Thomas – Scored four points with two rebounds and two assists in January match-up. Kirstyn Wright – led team with 16 points against Georgia Tech in January with four rebounds and three assists.

Georgia On My Mind Six players on the Clemson roster hail from the Peach State, while four are from the Atlanta area. Sophomore point guard Christy Brown attended Holy Innocents’ Episcopal School, located off of HWY 285. Moreemi Davis calls the small town of Perry home, and Tasha Taylor, who is red-shirting this season due to an injury, is from Columbus.