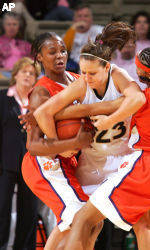 CLEMSON, SC – D’Lesha Lloyd will try to extend her double-figure scoring streak to 12 games on Friday night as the Clemson women’s basketball team begins the 2007 ACC season. The Lady Tigers (8-7) will face Wake Forest (8-4) in Winson-Salem, NC in a 7:00 pm match-up that will be televised on the conference’s Regional Sports Network (Fox Sports Net South, ComCast Sports Net, SunSports, New England Sports Network). Fans can also follow the action on the airwaves with the Clemson Tigers Sports Network. Don Munson will provide the play-by-play while Kanetra Queen will serve as the color commentator. The game will also be available on livestats via www.clemsontigers.com.

Lloyd, a junior from Columbia, SC, is averaging 18.5 points per game during her streak and owns a 15.4 season scoring average. Lloyd also leads the team on the boards, averaging 7.3 rebounds per game. Freshman Lele Hardy is atop the ACC with a 3.87 steals per game figure and she ranked sixth in the nation for the statistic as of Jan. 2 Hardy is averaging 11.3 points and 7.1 rebounds for the Lady Tigers and has scored in double figures in six straight games.

Clemson vs. Wake Forest, The Series Friday night’s match-up between the Lady Tigers and Demon Deacons will be the 54 meeting in history between the two schools. Clemson leads 41-12 in the series score and holds a 19-7 edge in games played in Winston-Salem, NC. However, Wake Forest won last season’s contest at the Lawrence Joel Memorial Coliseum, defeating the Lady Tigers 82-70, after Clemson posted a 75-68 victory on its own home court.

Scouting the Demon Deacons Wake Forest won seven straight games during the early part of the 2006-07 season, but the Demon Deacons have dropped their last three contests for an 8-5 overall record. Wake Forest opened ACC play on Tuesday night at Virginia Tech, falling by a 74-54 margin to the Hokies.

Yolanda Lavender leads the Deacs with a 17.2 scoring average, a figure that also ranks third in the ACC. She has drained 31 three-point shots this season, accounting for nearly 50% of her total made field goals. Corrinne Groves owns a team-best 10.8 rebounds per game average while also posting 12.0 points per game. Alex Tchangoue is also scoring in double-figures for Wake Forest with an 11.7 per game average while also pulling down an average of 7.7 rebounds per game.

Overall, the Deacs are scoring 59.9 points per game this season with a 42.1 rebounding average. They are shooting 38.4% from the field with a .318 three-point field goal percentage.