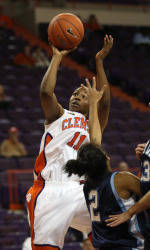 CLEMSON, SC – A late rally and a 17-point performance by Christy Brown could not carry the Lady Tigers to victory as Clemson fell to Georgia Tech, 74-58, for the second time this season.

Sunday’s game played out similar to the first match-up with the Yellow Jackets leading at the break and extending the advantage to over 20 in the second half. The Lady Tigers again hit their scoring stride late in the game; this time posting 14 unanswered points in a three-minute stretch that cut the deficit to 57-48 with 4:39 remaining.

“The momentum shifted towards the end of the second half,” said Clemson Head Coach Cristy McKinney. “We pressed and capitalized on a lot of steals which led to many easy baskets.”

“Unfortunately, we just didn’t do enough during the game for a win,” she added.

Lele Hardy turned in another solid effort for the Lady Tigers (10-16, 3-9 ACC) with her seventh double-double of the season, including two against Tech. The sophomore had 12 points with 10 rebounds and a team-best five assists. With four steals on Sunday, Hardy moved into ninth place on the Clemson career charts.

After Hardy knocked down a pair of free throws at the 12:37 mark of the first half, the Georgia Tech outscored Clemson, 18-2, in the next eight minutes for a 26-12 advantage. Iasia Hemmingway posted seven of her 13 total points and Jacqua Williams drained a pair of three-pointers during the stretch.

“Their forecourt pressure had us rattled on a lot of possessions, making it harder to set up our offense,” McKinney said. “When we did have good looks at the basket, the shots weren’t falling.”

The Lady Tigers will play their final home game of the season on Thursday night as the NC State Wolfpack comes to Littlejohn Coliseum. Tip-off is scheduled for 7:00 pm.