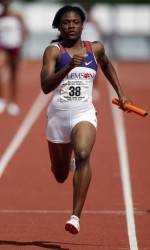 EUGENE, OR – Clemson concluded its 2010 outdoor season at the NCAA Championships on Saturday at Historic Hayward Field at the University of Oregon. Highlighted by a fourth-place showing on the final day by the 4x100m relay, the Clemson women’s team finished in 18th place with 15 points. Texas A&M won the women’s competition, while Oregon placed second. It was Clemson’s sixth top-20 finish at the NCAA Outdoor Championships, but its first since the 2002 meet in Baton Rouge, LA. Texas A&M also won the men’s team competition.

The 4x100m relay team had an excellent showing on a cool day in front of an electric crowd of 12,812. The team of Michaylin Golladay, Stormy Kendrick, Kristine Scott and Jasmine Edgerson put together a solid time of 44.12 and earned five points for the Tiger women’s squad. It matched the best finish in Clemson history for the event, tying the 2001 team that had a time of 44.19.

It was Clemson’s second All-America performance this season in a relay. During indoor season, the women’s 4x400m relay placed fifth overall with a group of four true freshmen. Edgerson was the common link between the two relays, as she competed with both groups this season.

April Sinkler put a close to a brilliant season on Saturday, but did not advance to the finals of the women’s long jump. Her best mark on the day was 20’4.25″, which put her in 10th place. She was just one centimeter shy of qualifying for the finals, and three more attempts. Nonetheless, it was a better showing in the event than she had indoors, when she finished 14th but earned All-America honors as one of the top eight American finishers.

The official list of All-Americans from the 2010 outdoor meet will be released at a later time by the U.S. Track & Field and Cross Country Coaches Association.