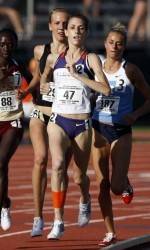 EUGENE, OR – Clemson track & field began its showing Wednesday at the NCAA Outdoor Championships at Historic Hayward Field, home of the Oregon Ducks. Four individuals and a relay team competed Wednesday, including Kim Ruck in the finals of the women’s 10K.

Ruck ran up front in the top two to three positions for the entire first half of the rain-soaked race. At the 6K mark, NCAA sensation Lisa Koll of Iowa State began to push the pace dramatically and subsequently ran away with the championship. Ruck, an indoor 5K All-American, placed 13th overall after establishing a personal best with a time of 33:42.88. Her time is No. 2 in the Clemson record books for the event.

The women’s 4x100m relay team advanced to the finals with ease. Clemson’s group of Michaylin Golladay, Stormy Kendrick, Kristine Scott and Jasmine Edgerson sailed across the finish line to win heat No. 2 with a time of 43.82, fourth-best of the day. The Tigers will battle for a national championship in the event on Saturday at 1:03 PM. The event will be televised live by CBS.

Kendrick and Scott competed nearly two hours later in the semifinals of the 100m dash. Kendrick, a freshman out of Gastonia, NC, had a solid start and came on strong late in the sprint to place third in her heat with a time of 11.47. She was 12th overall, just four spots out of advancing to the Friday night final. Scott (11.70) was 21st. Both are scheduled for the 200m semifinals Thursday.

Josh Fowler competed in his first-ever NCAA Championships meet, and put up a respectable effort. The red-shirt junior finished 15th in the triple jump after posting one legal jump of 50’6.75″.

It was a tough ending to the 2010 season for red-shirt junior Liane Weber, the ACC champ earlier this season in the heptathlon. She entered the competition with the second-best point value in the NCAA at 5,928. However, she suffered a torn foot tendon shortly after the conference meet and has not competed since then until Wednesday. She competed in the opening event, the 100m hurdles, but withdrew after it was obvious she was severely limited.

Still, it was quite a 2009-10 athletic year for Weber. She won the ACC title in the pentathlon and heptathlon, setting ACC records in both events. The native of Germany went on to a fifth-place NCAA finish in the pentathlon in March, earning All-America honors for the second time in her decorated career.

The Tiger program returns to action Thursday for several events, including the women’s triple jump where Patricia Mamona and April Sinkler will go for the gold at 7:00 PM. Clemson gets started early with multi-event athlete Miller Moss taking part in the decathlon at 1 PM.