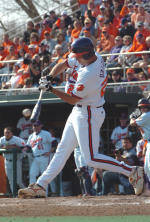 Clemson vs. N.C. State Clemson (13-6, 0-3 ACC), ranked as high as #10 in the country, will play its ACC home-opening series when it takes on #12 N.C. State (21-5, 5-1 ACC) this weekend in a three-game series at Doug Kingsmore Stadium. Game times are 7:15 PM (Friday), 7:00 PM (Saturday), and 1:00 PM (Sunday). All three games will be broadcast live on the radio by Clemson Tiger Sports Network. Live stats will also be available at ClemsonTigers.com for all three games.

The Series Clemson and N.C. State have met 159 times on the diamond, with the Tigers holding a 94-64-1 lead, including winning seven of the last nine meetings, in the series dating back to the 1921 season. Last year at N.C. State, the Wolfpack won two of three games, which included wins by scores of 8-3 and 9-8.

Tiger Head Coach Doug Kingsmore Stadium. Leggett was also 7-18 against the Wolfpack as the head coach at Western Carolina, meaning he is 35-32 all-time against N.C. State.

The Starting Pitchers In game one, N.C. State will start sophomore righthander Eryk McConnell (4-2, 2.50 ERA). The Waynesville, NC native has made seven starts for a total of 39.2 innings pitched. He has allowed 31 hits (.208 opponents’ batting average) and eight walks with 32 strikeouts.

The Tigers will counter with senior righthander Josh Cribb (4-0, 1.11 ERA) on Friday. The Lake View, SC native has made four starts and one relief appearance for a total of 24.1 innings pitched. He has allowed 14 hits (.167 opponents’ batting average) and six walks with 22 strikeouts. In game two, the Wolfpack will send out freshman lefthander Eric Surkamp (2-0, 3.28 ERA). The Cincinnati, OH native has made three starts and four relief appearances (24.2 innings pitched). He has yielded 20 hits and eight walks with 22 strikeouts.

The Tigers will counter with junior righthander Jason Berken (2-2, 2.82 ERA) on Saturday. The De Pere, WI native has made five starts for a total of 22.1 innings pitched. He has allowed 26 hits and nine walks with 23 strikeouts. N.C. State’s starter for game three has yet to be determined.

Clemson will start junior righthander Stephen Faris (1-0, 2.59 ERA) on Sunday. The Richmond, VA native had made five starts for a total of 31.1 innings pitched. He has a .206 opponents’ batting average, allowing 22 hits and seven walks with 29 strikeouts.

The Wolfpack N.C. State, led by 10th-year Head Coach Elliott Avent, enters the weekend series at #10 Clemson with a 21-5 overall record and 5-1 ACC mark. The Wolfpack’s last games came last weekend, as they won two of three over #1 Georgia Tech in Raleigh. They also have won eight of their last nine games after suffering a sweep at home to UCLA.

Andrew Brackman, who is a candidate to start on the mound on Sunday, had a steller freshman season in 2005. He has only made two appearances (both starts) in 2006 due to his participation on the Wolfpack basketball team that saw their season end at the hands of Texas in the second round of the NCAA Tournament last weekend. Brackman averaged 7.6 points and 3.5 rebounds per game while playing in all 32 contests this past season.

Clemson is hitting .276 with a .360 on-base percentage. The team also has 20 sacrifice bunts and 26 stolen bases in 31 attempts, including 8-9 in two games against Elon.

Herman Demmink is hitting a team-best .338 with a .453 on-base percentage as the Tigers’ leadoff batter. He is also 8-8 on stolen bases and has 14 walks against only nine strikeouts. Tyler Colvin has a team-high five homers and 15 RBIs, while Andy D’Alessio has four homers and 17 RBIs.

Rightfielder Travis Storrer, who missed both games against Elon due to an abdominal strain, is listed as questionable for the N.C. State series.

The pitching staff has a 2.69 ERA and .229 opponents’ batting average. Clemson’s three freshman hurlers (lefties Alex Martin, and righty Matt Vaughn) have combined for a 2-0 record and a 2.57 ERA in 21.0 innings pitched. Steve Richard also has a team-best three saves. The team is fielding at a .971 clip as well.

Southpaws Keeping Tigers in Right Direction Clemson has gone through the last few seasons with only a couple of lefthanders on its pitching staff. This year, there were slated to be five Southpaws on the Tiger roster. However, Alex Martin.

Tigers Rebound to Sweep Elon in Two Games Clemson won both games (by scores of 5-3 and 7-4) of a two-game, midweek series against Elon at Clemson on March 21,22 at Doug Kingsmore Stadium. Clemson out-hit Elon .258 to .215 and committed just one error. The Tiger offense also walked nine times against only four strikeouts and stole eight bases in nine attempts. Andy D’Alessio had three hits, including two homers, and six RBIs as well.

In game one on March 21, freshman lefthander Herman Demmink. Clemson snapped its three-game losing streak and Elon’s six-game winning streak with the victory.

In game two on March 22, Clemson managed just three hits, but capitalized on five Elon errors and seven walks in a 7-4 victory. Clemson scored five runs in the first four innings on only two hits, then D’Alessio gave the Tigers a three-run cushion with a towering two-run homer in the seventh inning. Freshman lefty Alex Martin pitched 3.1 shutout innings in relief to earn his first career win, while Matt Vaughn, Steve Richard, and Daniel Moskos pitched the final 4.0 innings without allowing a run to close out the game. Moskos also picked up his first career save. Clemson stole three bases and did not commit an error as well.