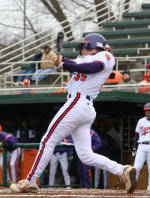 Behind the arm of righthander Kevin Slowey, Winthrop defeated Clemson 8-2 at Kingsmore Stadium on Wednesday in front of 2,804 fans. The Tigers’ record dropped to 5-5, while the Eagles improved to 14-3. The Eagles’ win broke Clemson’s three-game winning streak in the series, as their last win came at Clemson in 2001.

Slowey (5-0) earned the win, as he pitched his second complete game of the season. He allowed just two runs on four hits and walked none while striking out five. Starter David Kopp (0-2) took the loss in his first career start.

Winthrop struck first in the top of the first. Heath Rollins was hit by a pitch with one out, then Daniel Carte and Jacob Dempsey followed with singles. A bases loaded ground out by Tommy Lentz scored Rollins, and a Matt Repec bloop single just inside the right-field line scored Carte and Dempsey to give the Eagles an early 3-0 lead.

After Chris Carrara’s RBI double in the second inning, the Eagles chased Kopp in the top of third when Dempsey’s home run to right field gave Winthrop a 5-0 lead. The Eagles added one more run off of reliever Stephen Faris to take a 6-0 lead into the bottom of the third.

Clemson got on the board in the fourth inning. Taylor Harbin and Travis Storrer produced back-to-back singles, and Kris Harvey brought them home with a two-run double to left-center to cut the Eagle lead to 6-2. Tyler Colvin reached on an error but was thrown out trying to steal second, and a strikeout by Slowey ended the Tiger threat.

Faris settled down and kept Winthrop off of the scoreboard until the sixth when Robbins scored on Mitch Saum’s single through the left side to give the Eagles a five-run lead.

The Eagles added a run in the ninth and the Tigers never threatened again as they totaled only four hits on the day. Slowey faced the minimum three batters in eight of the nine innings. However, the four hits allowed were not indicative of how the Tigers swung the bat, as a stiff wind blowing straight in kept three balls in the ballpark and many more balls were hit hard right at Eagle fielders.

The Tigers will play host to South Carolina Saturday at Doug Kingsmore Stadium at 2:00 PM.