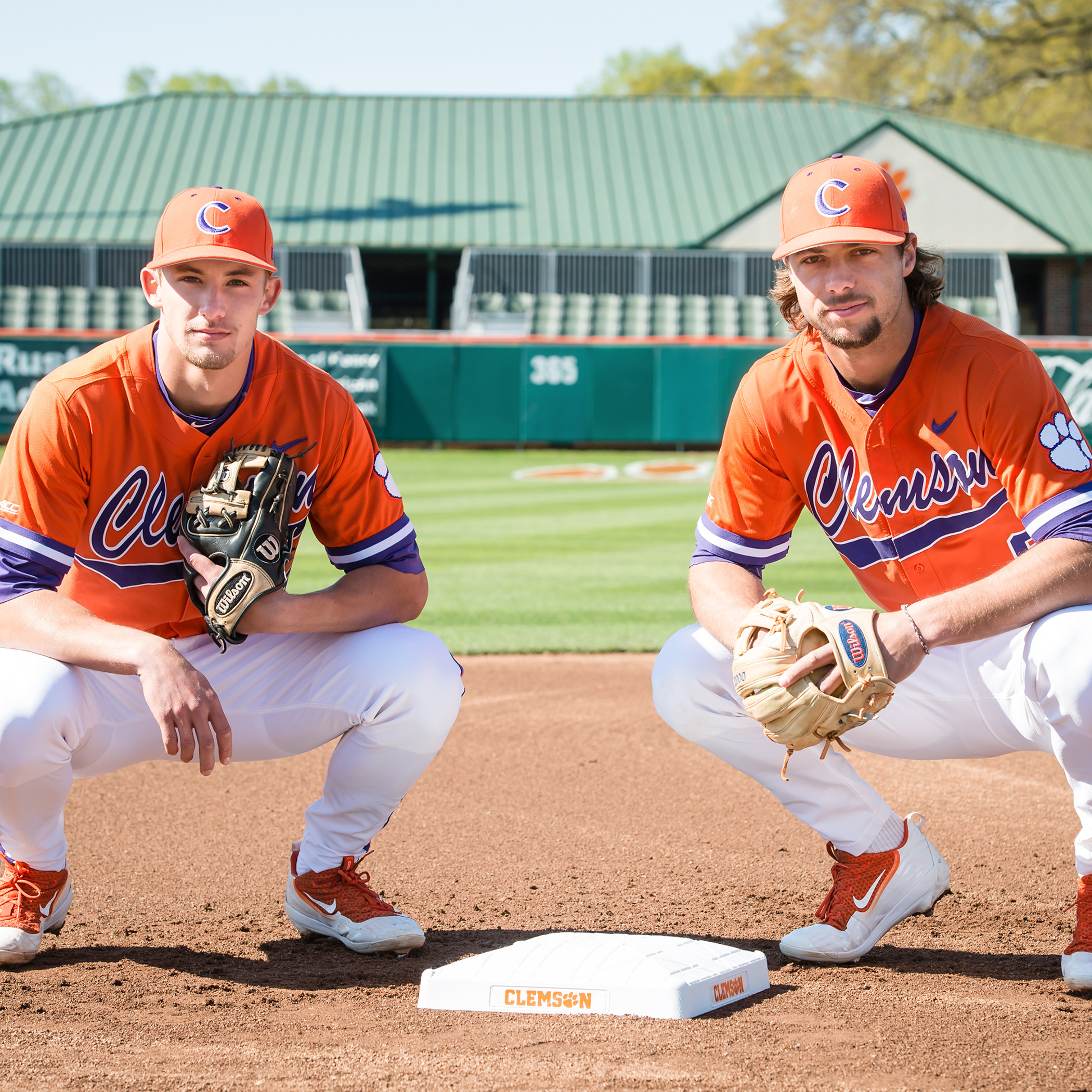 White & Wilson Up The Middle

Shortstop Eli White and second baseman Weston Wilson know they have to have a tight-knit bond on the field to lock down the middle infield defensively. Fortunately for the Tigers, the two infielders also happen to be close off the field, as they have been roommates since their freshman season in 2014.

Though their paths to Tigertown were fairly different, as White grew up in South Carolina and Wilson in North Carolina, they hit it off immediately and made instant impacts on the diamond.

“For me, being from North Carolina, I actually grew up an NC State fan,” admitted Wilson, whose hometown is High Point, N.C. “But then after my sophomore year, Clemson started to recruit me. I came on my visit, and that’s when I really fell in love with Clemson and decided to come here.”

The two infielders met for the first time when they came to Clemson on the same official visit. After the visit, they talked to the coaches and decided whom they wanted to live with during their freshman year.

“We picked each other, and it’s worked out pretty well,” said White.

The duo says that their close bond off the field contributes to their chemistry as middle infielders.

“Knowing each other so well off the field helps us play more loose on the field. Knowing Eli, it’s nice to have someone in the middle of the field who you’re close with.

“We still talked whenever I was over at third base (in 2014 and 2015), but being in the middle of the field makes it so we have to be more vocal than when I was at third. We’re having to communicate a lot more on who’s covering the bag and stuff like that.”

The chemistry between the two is rather characteristic of the 2016 Tigers as a whole, and that close bond amongst all the players is something that both White and Wilson think is unique to this team.

“Obviously, the coaching changes and ‘Wes’ moving to second are the big changes this year, but talking about this team, not that we didn’t have this in the past, but we really have great team chemistry,” said White. “We all love hanging out at the field together, and we’re all a tight-knit group.

“‘Wes’ and I have a tight bond, but there are tight bonds among everyone on the team. I think that’s a big thing, just being excited about coming to the field every day and working. It’s easy to have fun when you’re doing something, like playing baseball, with people you enjoy being around.”

“Along the same lines, I love how close everyone is to each other,” added Wilson. “We’ve had opportunities, like being in the new player facility, where we’re able to be around each other a lot more. That’s created a tighter-knit group for us. It’s definitely helped our success on the field this season, because everyone counts on everyone. There’s never been a time where I’ve doubted that someone is going to get a job done.”

Another quality of this year’s Tigers that White and Wilson have enjoyed is the way they are never out of games. They both think that some of the most exciting moments of their careers in the orange and purple have come in the form of walkoff wins this season.

At the same time, though, the infielders were quick to acknowledge that the success late in games has not come without concentrated practice and preparation. Neither player lived up to his own expectations defensively during the 2015 season, and they both emphasized how they returned to the basics during the offseason to ensure history did not repeat itself in 2016.

Wilson said he also went back to the basics in preparation for this season, and he noted that head coach Monte Lee moving him from third base to second base helped him to be more comfortable, both offensively and defensively.

“For me, I felt like I had a pretty good freshman year in the field, but then last year was a struggle for me,” admitted Wilson. “I think part of it was just that it was in my head. When you have time to make throws, sometimes you think about it too much, and then one error can lead to another when you’re struggling.

“And then I wasn’t hitting well last year, either. That also led to some defensive issues. Like Eli said, I just went back to the fundamentals. Second base is more of a natural position for me, because I’ve played shortstop my whole life, so I feel more comfortable there.”

When they’re not practicing or spending free time at Doug Kingsmore Stadium, the roommates like to take advantage of living on Lake Hartwell and go kayaking. They have also created an annual trip with their other roommate, fellow infielder Glenn Batson, where they travel to the Batson’s land in Elloree, S.C., to go hunting and fishing. Additionally, much like typical college students, they watch their fair share of Netflix and have some friendly roommate competition in video games.

That roommate competition does not necessarily translate onto the field, though, as they insist they are just as motivated by each other’s success as they are their own.

“I wouldn’t say competition in that we’re competing against each other,” expressed White. “I get excited when ‘Wes’ has success, and he gets excited when I have success. We do motivate each other, though.”

“If one of us does have a bad day, the other one is there for you,” added Wilson. “We remind each other that you have to keep your head up.”