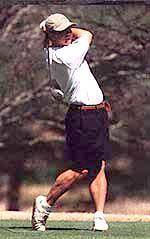 Clemson, SC – Former Clemson All-American and 1997 NCAA Champion Charles Warren fired a career best and course record 62 on Thursday and holds a first-round lead at the Chrysler Classic of Greensboro. Warren joined an elite list of PGA Tour players who have shot a 62 at the Forest Oaks Country Club. The others are Davis Love (1992), Mark O’Meara (1996) and Jeff Maggert (1999).

Lucas Glover, a fourth Tiger on the PGA Tour this year, shot a two-under-par 70 and is tied for 36th place. That means the four former Clemson players on Thursday were a combined 24-under-par, also an all-time best for one day.

Warren, who has missed the cut in his last five events, established his career high on the PGA Tour by four shots. He had a 66 earlier this year at the Buick Invitational in January and a 66 at Pebble Beach in 1999.

Warren’s round of -10 score of 62 is the lowest on record vs. par by a Clemson golfer in a PGA Tour event. Jonathan Byrd had a pair of nine-under par 63s previously, one in 2002 at the Buick Challenge and one in 2003 at the Mercedes Championship. Lucas Glover had a 63 at the Honda Classic earlier this year.

Trahan’s 65 included five birdies an eagle and 12 pars. He finished his day with an eagle three on the par five ninth hole. That was his 12th eagle of the year. He entered the Greensboro Open ranked fourth on tour in eagles/hole. Trahan’s round was just one shot off his career low 64 at the Colonial Invitational earlier this year. But, that is a par 70 course. This was a career best for score vs. par for Trahan on the PGA Tour.

Byrd’s round of 67 included two eagles, five birdies, a double bogey and two bogeys.. Byrd entered Thursday’s round with just four eagles all year, then made two in the first round. He was the only player in the field to have two eagles on Thursday.

Glover had a solid round of 70 thanks to three birdies and one bogey. He scored a bogey on the ninth hole, the same hole that yielded eagles to Trahan and Byrd. Glover entered the tournament ranked 57th on the money list this year, best among former Tigers.