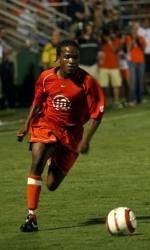 Clemson, SC – Wells Thompson and Steve Curfman both scored second-half goals to lead sixth-ranked Wake Forest to a 2-0 college soccer victory over fourth-ranked Clemson at Historic Riggs Field on Tuesday evening. Wake Forest improved to 10-2 overall and 2-2 in the ACC, while Clemson fell to 8-2-1 overall, 2-2-1 in the ACC.

Clemson will next be in action on Sunday when it plays at Furman in a 2:00 PM match in Greenville.

The two teams played to a scoreless tie in the first half. The Tigers had six shots in the opening 45 minutes, while Wake Forest had five. Clemson had the advantage in corner kicks 7-1, and Clemson goal keeper Phil Marfuggi had three saves to one by Wake Forest keeper Brian Edwards.

Wake Forest got on the board at the 54:38 mark when Thompson took a pass from Zack Schilawski and sped up the left side. He launched a kick from the left wing about 15 yards out and he beat Marfuggi with a shot to the far corner of the goal. It was the fifth goal of the year for the senior from Winston-Salem, NC, the home of the Wake Forest campus.

Wake Forest scored again at the 76:27 mark on a penalty kick by Steven Curfman. The play was set up when Clemson’s Micah Usry was called for a yellow card while trying to defend Wake Forest’s Ryan Solle. It was the third goal of the season for Curfman, a senior from Raleigh, NC.

The Wake Forest defense did an outstanding job of defending Clemson forwards Dane Richards and Frederico Moojen, who entered the contest ranked in the top four in the ACC in goal scoring with seven apiece.

Edwards was credited with the shutout in goal for Wake Forest, his seventh shutout in 12 games this season. He ranks second in the ACC in shutouts per game. He had four saves on the night, compared to three for Marfuggi.

The Tigers out-shot Wake Forest 16-13, and had the advantage in corner kicks 12-2, but the Demon Deacons came away with the victory.