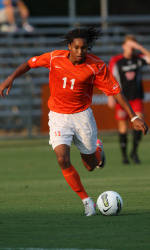 Wake Forest is now 1-2-1 overall, while Clemson falls to 1-2 this season. This was the ACC opener for both teams.

All of the scoring occurred in the first half.

The Tigers held the early edge after freshman Amadou Dia scored on a header goal just 24 seconds into the match. This was the quickest goal scored to start a match in the history of Clemson men’s soccer. The previous record for the fastest Clemson goal scored was :25 seconds by Austin Savage in 2010 vs. NC State and :39 by Wolde Harris vs. Vanderbilt on September 4, 1994.

Bryniar Benediktsson crossed a pass to Dia and was credited with the assist. This was Dia’s second goal of the season.

With 12:32 remaining to play before halftime, Ibikunle scored the equalizer. Teddy Mullin sent a free kick in the box and Ibikunle sent a shot into the goal to tie the score at 1-1.

In the 43rd minute, Jared Watts chipped a pass to Randolph who sent a shot into the upper right corner of the net to give the Deacons a 2-1 lead.

Clemson will play host to ACC-foe Duke on Friday, September 16, at 6:00 p.m. at Historic Riggs Field.