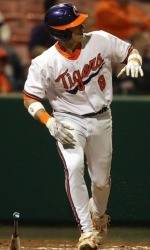 GREENSBORO, NC – Virginia pitcher Will Roberts has been named the Atlantic Coast Conference Pitcher of the Week, while Clemson infielder Richie Shaffer and Miami first baseman Rony Rodriguez share Player of the Week honors for their performances during the week of March 28-April 3.

Roberts was also named a National Player of the Week by Collegiate Baseball after pitching a perfect game in the Cavaliers’ 2-0 shutout of visiting George Washington on March 29. Roberts tossed the second perfect game in ACC history and the eighth perfect game in NCAA Division I baseball (since 1957). The Richmond, Va., junior joined Maryland’s Dick Reitz (vs. Johns Hopkins, 1957) as the lone ACC pitchers to throw perfect games. Roberts is the first Division I pitcher to record a perfect game since Auburn’s Eric Brandon against Murray State on March 2, 2002. Roberts struck out 10, tying a career high. He also recorded 14 groundouts and three flyouts as only one ball left the infield. Roberts needed just 98 pitches to finish off his perfect game.

Clemson’s Shaffer went 7-for-15 (.467) with a double, triple, grand slam and five RBIs in four games. He scored seven runs and recorded three walks while posting an .867 slugging percentage and .556 on-base percentage. The Charlotte, N.C., sophomore was also perfect in the field, committing no errors in 12 chances at third base and first base. In the final two games at No.6 North Carolina, Shaffer went 5-for-7 with two walks, reaching base in seven of his nine plate appearances (with one of his two outs coming on a line-drive to the Tar Heel third baseman). In Shaffer’s biggest play of the week, he broke open a close game with a grand slam in the sixth inning to propel the Tigers to an 11-5 win over Georgia on March 29.

Miami’s Rodriguez led the Hurricanes at the plate with a .750 average on six hits in eight official at-bats while drawing two walks, keying his team to a 3-0 week. In Sunday’s doubleheader at Boston College, the junior who calls Miami, Fla., home batted 4-for-5, including his team-leading fourth home run of the year. Rodriguez helped keep the Hurricanes perfect on the road in ACC play at 5-0. His slugging percentage for the week was 1.125, and he was perfect defensively with 14 putouts and an assist.