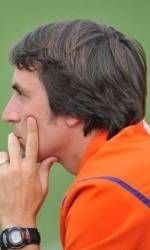 CLEMSON, SC – Clarke Bentley and Emmanuel Akogyeram both scored one goal and had one assist each in leading Virginia Tech to a 4-2 win over Clemson in a men’s Atlantic Coast Conference soccer match at Clemson, SC Sunday evening.

Clarke Bentley scored first for the Hokies in the 22nd minute. After a misclear by the Clemson defense, Bentley collected the ball and drove down the right side and before he got to the end line, he released a shot from a severe angle and the ball went in the netting for his first goal of the season.

Clemson tied the score in the 36th minute. Tommy Drake crossed the ball from the left springing Mike Mattson free in the box. Mattson fired a shot from the middle of the box and into the upper right corner of the goal. This was his first goal of the year.

Virginia Tech went up 2-1, with 5:57 left to goal in the first half. Akogyeram drove in the box. He gave the ball back to Robert Alberti on a give-and-go. Alberti sent a pass to Bentley. Bentley crossed the ball to Akogyeram. He sent a 12-yard shot in the netting for his first goal this year.

Clemson tied the score once again in the 52nd minute. Nathan Thornton sent the ball to Eric Cava. Cava fired a shot from 18 yards out into the right corner of the goal. This was Cava¹s first goal this year.

The Hokies took the lead for good almost six minutes later. Virginia Tech’s goalkeeper Brendan Dunn punted the ball and Charlie Campbell ran underneath it deep on Clemson¹s end of the field. Campbell sent a diagonal shot from 12 yards out into the goal. This was his second goal this season.

Virginia Tech went up 4-2 in the 65th minute. Akogyeram took a shot from 12 yards out and the ball rebounded off Clemson’s goalkeeper Joseph Bendik. James Shupp was there to tap the ball in the goal near the left post. It was Shupp’s first goal this year. Akogyeram was credited with the assist.

Clemson outshot the Hokies 19-13. The Tigers also had five corner kicks today while Virginia Tech had none. Bendik had four saves today and Dunn finished the match with five.

“We started the game well,” said Clemson Head Coach Phil Hindson. “However we handed them the game. We changed our approach today, but we did a very poor job defending. We couldn¹t do a better job giving them the game. This was a very winnable game for us today, but we found a way to lose it.”

Clemson will play at Virginia on Saturday, September 26, at 7:00 p.m. in the Tigers¹ next action.