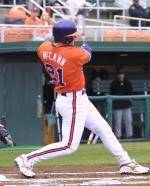 Ryan Zimmerman had three hits, including two triples, and Andrew Dobies quieted Clemson’s bats in a 5-1 Virginia win over the #23 Tigers Friday night in front of a record crowd of 2,000 at UVa Baseball Stadium. The loss broke Clemson’s nine-game winning streak and was the first conference loss for the Tigers in 2004. Clemson fell to 18-11 overall, 6-1 in ACC play. The Cavaliers improved to 27-7 overall, 9-4 in the ACC. It was Virginia’s seventh win in a row.

Dobies (6-0), the lefty starter for Virginia, held the Tigers to just four hits and one run over 7.0 innings of work to earn the win. Dobies and reliever Casey Lambert combined to allow just one hit after the third inning and five in all. The two Cavalier pitchers also held Clemson to just one hit in 12 at-bats with runners on base. Tiger starter Tyler Lumsden (2-2), a native of Roanoke, VA, pitched 7.0 innings, allowing four earned runs on nine hits, and suffered the loss.

The Tigers jumped out to a 1-0 lead in the first inning on an RBI single by Brad McCann, who extended his hitting streak to 10 games with the hit. Herman Demmink, a native of Midlothian, VA, led off the game with a single to left field and scored from second on McCann’s single up the middle.

Virginia came right back with with a run in the bottom of the first inning. Mark Reynolds drew a one-out walk on four pitches, stole second, and advanced to third on Zimmerman’s bloop single to shallow centerfield on an 0-2 pitch. Joe Koshanky then grounded a one-hopper to John Ingram at first base. After making a nice stab, Ingram stepped on first base for the second out, but Reynolds was safe at home.

The Cavaliers took a three-run lead in the third inning thanks to some timely two-out hitting. Zimmerman hit a two-out triple down the right-field line. After Koshansky walked, Matt Dunn hit an infield single to shortstop, scoring Zimmerman. Then after the two baserunners advanced on stolen bases, Paul Gillispie followed with another infield single to shortstop to plate Koshansky. Dunn then came across to score on a passed ball to give Virginia a 4-1 lead.

Virginia added an insurance run in the seventh inning thanks again to the combination of Zimmerman and Koshansky. Zimmerman hit a one-out triple down the right-field line, almost in the identical spot as his previous triple. He scored after Koshansky hit a high fly ball to left field.

The Tigers threatened to cut into the Cavalier lead in the eighth inning with a two-out rally of their own. McCann and Lou Santangelo drew two-out walks from Lambert. Then Ingram hit what looked like a deep drive near the left-field foul pole, but Dunn hauled in the ball just in front of the 352 sign.

Clemson and Virginia will wrap up the series with two games Saturday starting at 1:00 PM at UVa Baseball Stadium. The second game will start approximately 45 minutes after the conclusion of the first game. The two teams were scheduled to play Saturday night and Sunday afternoon, but the threat of inclement weather Sunday forced the move to a doubleheader Saturday. Both games Saturday will be broadcast live on the radio by the Clemson Tiger Sports Network.