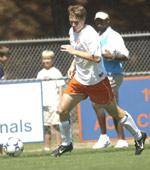 CHARLOTTESVILLE, Va. – The University of Virginia men’s soccer team recorded a 3-2 victory over the visiting Clemson Tigers in an Atlantic Coast Conference match in front of 2,461 spectators at UVa’s Klöckner Stadium. The Cavaliers built a 2-0 lead after one period of play, but the Tigers answered back with two second half goals to knot the score at 2-2. But with just 3:38 remaining in the match, Virginia first-year midfielder Will Hall (Shirley, N.Y./St. John the Baptist) scored his first collegiate goal on a one-timer that proved to be the game-winning score, lifting the Cavaliers to a 3-2 victory.

UVa wasted no time and took an early 1-0 lead just 2:27 into the match when Mike Littlefield (Manassas, Va./Osbourn Park) made a play on a ball that ended up at the feet of teammate Adam Cristman (Glen Allen, Va./Godwin). Cristman then fired a chip-shot from nine yards away to score the first goal of the contest. The Cavaliers extended their lead to 2-0 at the 19:14 mark when John Hartman (Roanoke, Va./Cave Spring) scored his first collegiate goal after converting a penalty kick that was awarded to Virginia after a Clemson defender was whistled for a hand-ball in the box. Hartman’s goal gave UVa a two-goal lead that it took into the locker room at half time.

The Tigers came out on the attack to start the second period and scored their first goal of the match at 49:45 when Chase Hilgenbrinck played a ball into the box that was headed into goal by Nick Rivera to make it a 2-1 contest. Clemson then tied the match at 2-2 just over seven minutes later at 57:04 when Nick Rivera sent a free kick to Grant Kevins, that Kevins gathered before firing a hard one-timer into the Cavaliers’ goal to make it a 2-2 contest.

With just over three and a half minutes remaining in the match, Virginia had a corner kick that was cleared by Clemson but ended up right at the top of the box in front of the Cavaliers’ Hall. Hall then fired his one-timer and beat the Tigers’ goalkeeper Hunter Gilstrap for the game-winning score at 86:22 to lift UVa to a 3-2 victory.

UVa goalkeeper Ryan Burke (Cumberland Foreside, Maine/Greely) made two saves between the pipes to preserve the Cavaliers’ victory, while Gilstrap made a game-high three saves in a losing effort.

Clemson will return to home action on Sunday, October 19th when the Tigers host the Wake Forest Demon Deacons in an ACC match beginning at 2:00 PM at Historic Riggs Field.