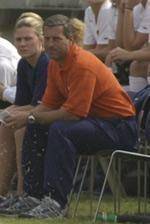 CHARLOTTESVILLE, VA – The No. 4 ranked Virginia women’s soccer team scored twice in the second half to down No. 24 Clemson Sunday afternoon at Klockner Stadium. The win improves the Cavaliers’ record to 13-2-1 on the season, 5-2-1 in the ACC, while the Lady Tigers fell to 10-6-0, 4-4-0 in the ACC.

Clemson was attempting to record its fourth top 10 win of the season. Earlier, Clemson defeated top 10 teams from Texas, Texas A&M and Duke.The win snapped the Tigers seven match win streak against the Cavaliers. It also assured Virginia a top-three finish in the ACC.

“It was a typical ACC battle,” said Clemson head coach Todd Bramble. “It was a hard fought match, which is typical of our schedule. We have been playing top 10 teams all season. Although it was more even than the score indicated, I give Virginia credit. The better team won today.”

The Cavaliers had a chance to take an early lead in the sixth minute. Kristen Weiss was taken down on her run into the box and a penalty kick was awarded. However, Tiger keeper Lauren Johnston made a diving save on the penalty kick attempt by Gillian Hatch. Although the Cavaliers out-shot Clemson 6-2 in the first half, the game went to halftime scoreless.

Virginia got on the scoreboard in the 58th minute as Noelle Keselica scored her second goal of the season. Off a corner kick, Katie Bunch (St. Louis, Mo.) hit a cross to the far post that Keselica headed in for a 1-0 Cavalier advantage. Virginia added a second goal in the 77th minute as Julia Falk sent a through ball to Lindsay Gusick, who dribbled around the keeper and tallied her team-leading 11th goal of the season.

Overall, the Cavaliers outshot Clemson 16-6 in the game. Christina de Vries made a career-high six saves while tying the Virginia single season record with her 11th shutout of the year. Johnston made seven saves for Clemson.