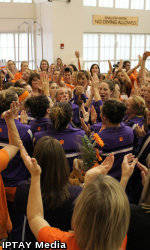 Athletic Highlights: The Clemson men’s and women’s swimming and diving teams closed out 83 seasons of regular season competition with a sweep of Emory University on Saturday afternoon at McHugh Natatorium. The Tiger women’s team knocked off the Eagles 180-116, while the Tiger men’s team picked up a 174-121 win.

“This was great for Clemson swimming and diving,” Head Coach Christopher Ip said. “We took down some records that were owned by gold medalists, NCAA All-Americans, and people who have won NCAA national championships. That shows how competitive this team is, and we’re not done yet.”

Clemson broke five pool records in front of a packed house for Senior Day at McHugh, the Tigers’ home facility that was in use for the first time in more than a year due to renovations. A large contingency of alumni and fans cheered the Tigers to a season-ending victory. All Emory swimmers and divers wore ribbons with Clemson colors to show support and respect for the end of an 83-season long program.