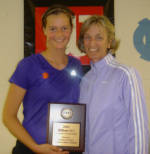 CHAPEL HILL, NC – Clemson women’s tennis player Federica van Adrichem captured the 2005 Wilson/ITA Southeast Regional title on Monday, Oct. 17 with two wins at the Cone-Kenfield Tennis Center on the campus of the University of North Carolina. With her performance, van Adrichem earned a bid to the 2005 ITA National Indoor Championships held on the campus of The Ohio State University from Nov. 3-6. She is the first Clemson women’s tennis player since Julie Coin in 2002 to win the regional championship and just the second in Head Coach Nancy Harris’ nine-year tenure.

Coin, who was a sophomore in 2002, went on to win her first round match in the national indoor tournament before falling in the second round. Van Adrichem, the seventh seed in the regional tournament, won six matches in the five-day event to claim the championship. She defeated #3 seed and 108th-ranked Jenna Long of North Carolina in the semifinals Monday morning, 7-6(5), 6-2, and then posted her second consecutive upset with a 6-3, 6-3 victory over Duke’s fourth-seeded and 68th-ranked Jackie Charleton in the finals.

“I can’t express how proud I am of Federica,” Harris said. “She performed at the highest level and defeated some great players here at the Regional. She represented the Clemson Tigers well and I couldn’t be happier for her.”

Van Adrichem, a freshman from Amersfoort, Netherlands, boasts a 9-2 overall record after the weekend’s tournament. The ITA Southeast Regional title is her second of the fall season as she previously won the flight one Furman Fall Classic in Greenville, SC.