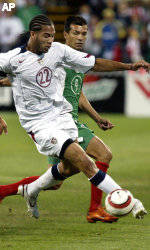 COLUMBUS, Ohio – Michael Bradley scored twice to lead the United States to a 2-0 victory over Mexico in a World Cup qualifier Wednesday night, preserving the Americans’ domination in the series over the last nine years.

On a wet and windy night at Crew Stadium — under the threat of a tornado watch — the Americans ran their record to 9-0-2 on U.S. soil against Mexico since 2000. Tickets had sold out in 90 minutes, with many of the 23,776 fans showing up hours before to stand in the rain while waving flags and wearing their national colors.

Onyewu scored the game-winning goal in the ACC Championship match vs. North Carolina (11-3-01) and two goals in the closing minutes of the NCAA Tournament match vs. Alabama-Birmingham (12-2-01). He was a member of the ACC 50-Year Anniversary Team and a starter on the 2006 US World Cup team

After both teams played cautiously at the outset, the Americans finally broke through.

DaMarcus Beasley’s corner kick found Landon Donovan at the far side of the 6-yard box, with Donovan heading it back into the scrum. Onyewu’s header was stopped by diving Mexico goaltender Oswaldo Sanchez, but the rebound came right into the path of Bradley, who kicked it in from 6 yards.

Then, in second-half stoppage time, Bradley took a pass from Donovan and his shot from 28 yards dipped under Sanchez’s arms. It secured the third straight 2-0 win for the Americans over Mexico at Crew Stadium in World Cup qualifying.

Michael Bradley said it was the Americans’ defense which spelled the difference.

The match was the first of 10 in the final round of qualifying for each team. The United States next plays at El Salvador on March 28 before taking on Trinidad and Tobago on April 1 in Nashville, Tenn. Mexico entertains Costa Rica on March 28.