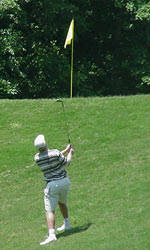 The U.S. won 10 of the 16 singles matches played today, including seven of the eight in the morning round.

The win marked the third time the Americans have won the two-day match play event. The series record stands 3-1-1.