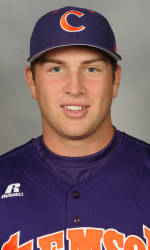 Dillon Napoleon pitched 7.0 strong innings and Keith DePew scored both Blazer runs in UAB’s 2-1 win over #16 Clemson in front of 5,944 fans at Doug Kingsmore Stadium on Friday afternoon. The Blazers improved to 1-0, while the Tigers fell to 0-1 and lost their first season-opener since 2004. It was the first-ever meeting between the two schools.

Napoleon (1-0), a senior righthander, stifled Tiger hitters all day despite only striking out one batter. In 7.0 innings pitched, he allowed only four hits, one run, and two walks to earn the win. Ryan Nance pitched the final 2.0 innings without allowing a hit or run to record his first save of the year. The two Blazer pitchers combined to strike out just two batters, but they combined for 17 flyball outs and allowed just one of Clemson’s 11 baserunners to score.

The Tigers took the game’s first lead in the second inning. Jon McGibbon drew a one-out walk and scored on Spencer Kieboom’s double off the wall in left-center.

In the third inning, DePew led off with a single up the middle and advanced to third on Jacob German’s double over the third-base bag. But Brady retired three of the next four Blazers and kept them off the scoreboard.

The Blazers finally broke through in the fifth inning. DePew led off with a walk on four pitches and moved to third on German’s single through the right side. Matt Morse’s sacrifice fly to right field plated DePew to tie the score 1-1.

In the seventh inning, DePew flared a one-out single to left and moved to third on German’s double to left field. Pinch-hitter Tyler Mims hit the first pitch to left-center for a sacrifice fly to score DePew, giving UAB a 2-1 lead.

DePew and German, the #7 and #8 batters in the lineup, proved to be a thorn in the Tigers’ side. In eight combined plate appearances, they reached base seven times, with the only time not reaching base coming on a sacrifice bunt. DePew was 2-for-2 with two runs and two walks, while German was 3-for-3 with two doubles.

Kieboom paced the Tigers by going 2-for-3 with a double, hit-by-pitch, and RBI. Clemson, who had just four hits in the game, combined for five hit-by-pitches, but stranded nine runners on base.

Due to the threat of inclement weather over the weekend, Clemson and UAB will play a doubleheader to conclude the series on Saturday at 11:00 AM. Both games will be nine-inning contests and there will be approximately 45 minutes in between games.