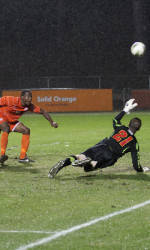 CLEMSON, SC–The U.S. Under-20 Men’s National Team will kick off the new year with a 36-player training camp in Ft. Lauderdale, Fla. The camp will be held from Jan. 2-9.

Clemson Freshmen midfielder Amadou Dia and defender Phanuel Kavita were called into the U-20 US national Team training camp this week in Ft. Lauderdale, Fla. The 36 player event will be held from January 2-9 and includes college and professional players from throughout the US.

“We are very proud of Amadou and Phanuel and know they will represent Clemson well during the training camp,” said Head Coach Mike Noonan. ” This is a great opportunity for them to grow as players and to showcase their abilities with other top athletes.”

Head Coach Tab Ramos is preparing the squad for the 2013 FIFA Under-20 World Cup qualifying tournament, which will likely begin in early 2013. The World Cup will be held in Turkey in 2013, and every player in the current camp is age-eligible for the competition.