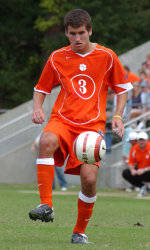 TORONTO, ONT., CANADA–The U.S. Under-20 Men’s National Team is prepared to take on Uruguay in the 2007 FIFA Under-20 World Cup Round of 16 match-up. Kickoff is set for Wednesday, July 11, at 7:45 p.m. ET from a sold-out National Soccer Stadium in Toronto. The game will be shown live on ESPNU and Galavision, and fans can follow the game live on ussoccer.com’s MatchTracker.

With a 2-1 victory over Brazil on July 6, the U.S. earned the top position in Group D with seven points. The U.S. earned three points with their 6-1 win over Poland and one point with a 1-1 tie with South Korea in the opening game of group play. Uruguay finished as the third-place team in Group B after drawing, 2-2, with Spain, topping Jordan, 1-0, and falling to Zambia, 2-0. Uruguay finished with four points, and was one of four third-place teams to advance to the knockout rounds.

The U.S. leads the tournament with nine goals scored in group play, ahead of Group B winner Spain, who has eight. Three Americans: Freddy Adu, Josmer Altidore and Danny Szetela, are currently all tied for second-place in the race for the Golden Boot with three goals apiece. Only Adrian Lopez of Spain is ahead of the trio with four goals scored.

After a three-goal performance against Poland on Tuesday and two assists against Brazil on Friday, midfielder Freddy Adu was named the soccer Player of the Week by TSN, the largest sports network in Canada. Leading the U.S. to a first-place finish in Group D, Adu received the honor over Copa America standout Lionel Messi, and teammate Josmer Altidore.