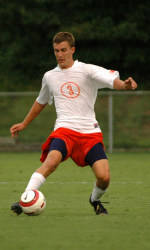 RIO DE JANIERO, Brazil (July 15, 2007) – The United States Men’s Pan American Team topped Venezuela, 2-1, at their tournament opener on a last-second goal from Bobby Warshaw, and sits on top of Group B with three points.

After a scoreless first half, Stephen McCarthy put the U.S. ahead in the 50th minute. In a match that saw a total of eight yellow cards and an ejection, Venezuela was awarded a penalty kick in the 76th minute, and Francisco Flores evened the score.

Late-game substitute Bobby Warshaw scored the game-winning goal in the third and final minute of stoppage time in the second half to lift the U.S. to victory. The U.S. plays Bolivia, who tied Mexico in their opener, on July 18.

Clemson’s Greg Eckhardt started the match for the U.S. Men. Eckhardt is a rising sophomore at Clemson. He is from Orange Park, FL.