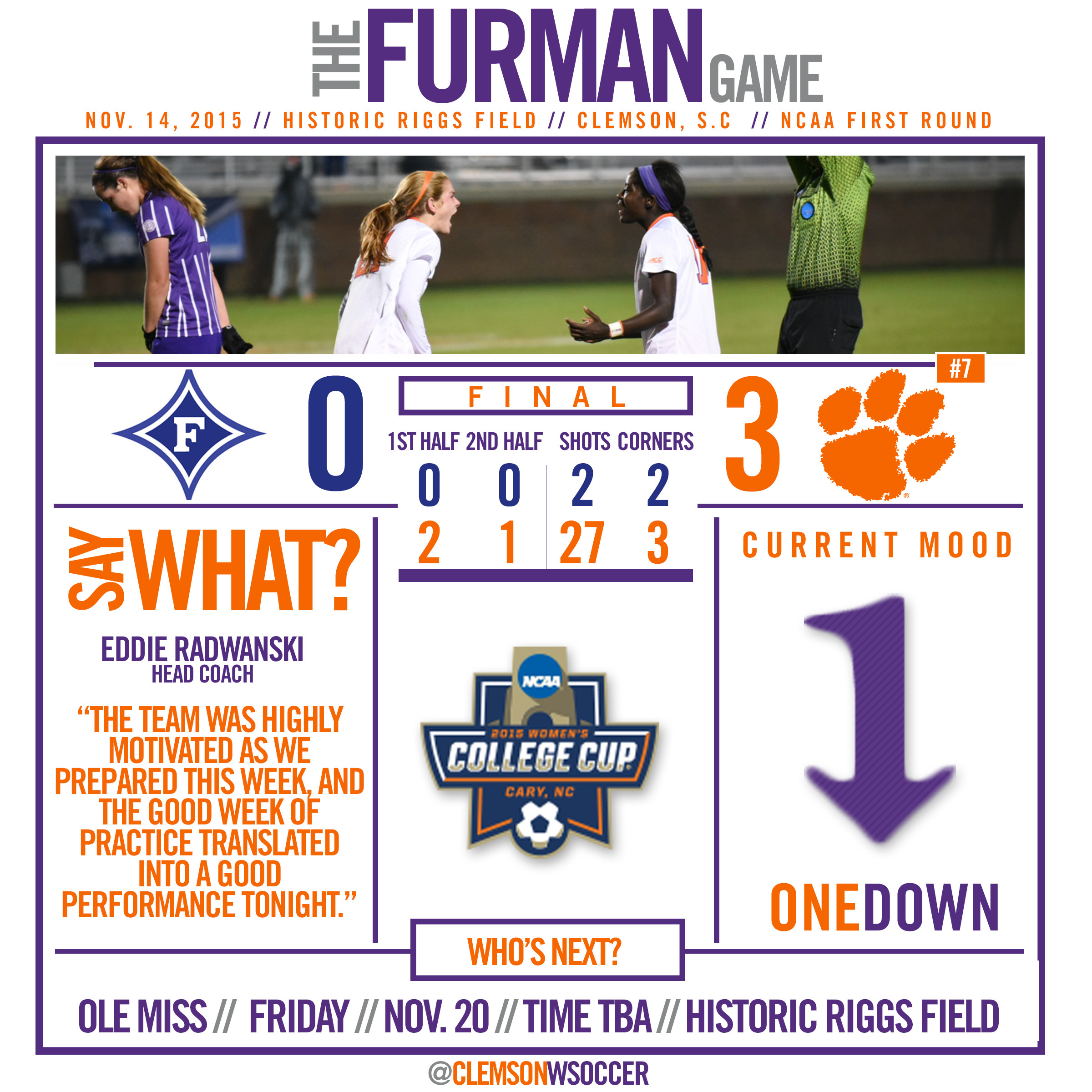 CLEMSON, S.C. – Three different players scored in the No. 7 Tigers’ 3-0 shutout of Furman (17-5-1) in the NCAA First Round on Saturday night at Historic Riggs Field. Clemson improved to 14-4-1 with the win, which was the first NCAA Tournament victory for the program since Nov. 16, 2007, when the Tigers defeated Charlotte, 4-2, in the NCAA First Round in Knoxville, Tenn. It was also the programs first NCAA win under head coach Eddie Radwanski in his fifth year with the team.

“We had a good week of practice and it translated into a good performance tonight,” said Head Coach Eddie Radwanski. “The team was highly motivated as we prepared this week, after last year’s NCAA Tournament and last weekend’s result.”

Sophomore forward Shannon Horgan got the scoring started for the Tigers at the 11:19 mark off an assist from Paige Reckert. Reckert’s pass into the box bounced around before Horgan was able to get a knee on it and knock into the back of the net. The goal was Horgan’s third of the season and brought Reckert’s assist total to three.

At the half the Tigers entered the locker room up 2-0 on the Paladins, not allowing Furman a shot or corner kick in the half. Clemson accumulated 13 shots in the half and registered three corner kicks.

In the 66th minute, Catrina Atanda fired a ball on goal that we deflected out by the Furman keeper. Abby Jones was able to handle the bouncing ball and made a few moves before firing a shot into the back of the net for her third goal of the season.

Junior goalkeeper Kailen Sheridan would not register a save in the match and would go on to earn her 22nd career shutout for the Tigers. The 22 shutouts in her Clemson career moves her into sole possession of second place in Clemson women’s soccer history in career shutouts.

The Tigers advance to the NCAA Second Round, and will host Ole Miss on Friday, Nov. 20 at Historic Riggs Field. The Rebels defeated Murray State 1-0 in their first-round match on Friday, Nov. 13 in Oxford, Miss. The match time and ticket information for the second-round contest will be announced early next week.