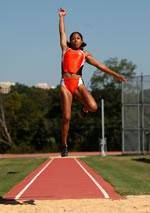 Clemson, SC – Gisele Oliveira set a school record in the triple jump and Krystal Woods captured the discus title to highlight the performance of the Clemson women’s track team on Saturday. It was the final home meet of the year for the Clemson team.

Oliveira set the school and ACC standard in the triple jump with a jump of 13.66 meters, or 44′ 9 3/4″. She broke her own Clemson record, which had been 13.56 meters, and set the new ACC mark, breaking the former record of 44’7″ held by Teresa Bundy of Florida State. She currently ranks 14th in the world with that leap. Oliveira, a junior, is rapidly become one of Clemson’s top track athletes in history. She was an NCAA All-American in the triple jump as a freshman and sophomore and a long jump All-American outdoors in 2003.

Kystal Woods, a sophomore from Warminster, PA, was also an event champion for the Tigers as she won the discus with a throw of 46.89 meters, or 153′ 10″ It the best mark by a Lady Tiger in that event this year and it moved Woods to fourth on the Clemson performers list. It was also an NCAA Regional qualifying mark.

Silja Ulfarsdottir, a junior from Reyjavic, Iceland, had a qualifying time in the 400 meter hurdles with a 59.60 figure, and moved into fourth on the Lady Tigers’ all-time list in the 100m hurdles with a time of 13.81 set in the preliminaries of the event on Saturday.

Della Clark, a freshman from Acworth, GA, recorded a season-best throw of 176’4″ in the hammer to qualify for the East Region Championships. That performance moved her into second on the Lady Tigers’ all-time list in that event.