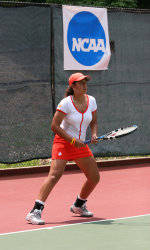 CLEMSON, SC – Clemson women’s tennis players Carol Salge and Federica van Adrichem will open play at the 2006 Riviera/ITA All-American on Tuesday, Oct. 3. This year’s event will be held at the Riviera Country Club in Pacific Palisades, CA. The first and second rounds of the qualifying singles bracket will be held on Tuesday while the final round will be played on Wednesday. The main draw of the tournament will then begin on Thursday, Oct. 5 and continue through Sunday.

Salge earned a 9-16 seed and will face Paula Mesterova of Loyola Marymount at 11:00 AM, Pacific Time. The Tiger junior is ranked 45th in the Fila/ITA Tennis preseason singles poll after compiling a 24-10 overall record last year.

Van Adrichem’s opening match against Michigan’s Jenny Keuhn is scheduled to begin at 12:30 pm. She is also listed in the preseason rankings at #40 after posting a 22-15 record in her first year at Clemson.

Second round and consolation bracket matches will then be played on Tuesday afternoon.