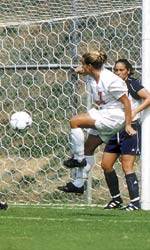 Clemson, SC – Clemson sophomore soccer players Oguchi Onyewu and Lindsay Browne have each been nominated for the Missouri Athletic Club men’s and women’s Collegiate Soccer Players of the Year awards. The M.A.C. award is the official National Soccer Coaches Association of America award for Division I players. 15 women’s players and 15 men’s players are nominated for this year’s award and Clemson is one of only four Division I schools to have a nominee for both the men’s and women’s awards.

Onyewu, a 2000 First-Team All-ACC defender from Olney, Maryland, is one of three ACC players to be nominated for the men’s award. Despite being a defender, Onyewu has three goals and four assists for a total of 10 points for the eighth-ranked Tigers this season. He was named the Defensive MVP of the Clemson Nike Invitational earlier this season after leading Clemson to consecutive shutout victories over Cal Poly and 20th-ranked Virginia Commonwealth. For his outstanding performance in the tournament, Onyewu was also named the ACC Player of the Week on October 1. Onyewu is a major reason why Clemson has allowed only 13 goals all season and has six shutout victories.

Browne, a forward from Encinitas, CA, is one of just two sophomores listed on the women’s ballot. Named last season’s National Freshman of the Year by Soccer America, Browne currently leads the 12th-ranked Lady Tigers with nine goals and seven assists for 25 points. Despite being just a sophomore, she is currently seventh all-time in Clemson history in points with 63 and is on pace to break the all-time record of 114 points set by Sara Burkett between 1995-1998. She was named the ACC Player of the Week on October 1 for her three goal performance against 11th-ranked Virginia. For her play against the Cavaliers, she was also selected to Soccer America’s Team of the Week.

The winner of both the men’s and women’s award will be presented with the prestigious crystal ball trophy at the awards banquet on Friday, January 11, 2002 at the Missouri Athletic Club in St. Louis. They also will be honored at the NSCAA convention in January in Philadelphia.