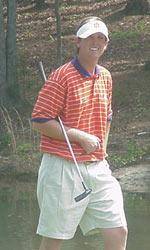 Gregg Jones and Martin Catalioto, both members of the 2003 Clemson National Championship golf team, have qualified for the United States Amateur. That event will be held at Oakmont Country Club in Oakmont, PA August 18-24.

Jones qualified after shooting a 138 over 36 holes at Pinewild Country Club in Pinehurst, NC, while Catalioto also had a 138 at the Glen Arbor Golf Club in Bedford, NY. Catalioto had the low score at that site, while Jones was second to John Eades, at Pinewild. Eades is a member of the Maryland golf team.

It will be the first national amateur for both players. Catalioto also played in the United States Public Links national tournament in July and is the only Clemson player to play in both national amateur events this year. The winner and runnerup of the US Amateur are granted an exemption into the 2004 Masters.