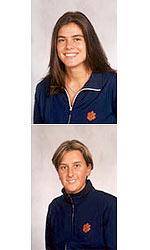 CLEMSON, S.C. – Clemson’s Milena Stanoycheva and Alix Lacelarie were named to the All-Atlantic Coast Conference Women’s Tennis Team for the 2002 season. Also among the 12-member team are four North Carolina players, three Duke players, two players from Wake Forest and one from Maryland. Wake Forest’s Bea Bielik earned Player of the Year honors and Georgia Tech’s Bryan Shelton was named the 2002 ACC Coach of the Year.

Stanoycheva and Lacelarie are the fourth and fifth Tigers to be named to the All-ACC Women’s Tennis Team in head coach Nancy Harris’ five years at Clemson. Catherine Galvin was named to the team in 1998 and Carmina Giraldo was a two-time nominee in 1999 and 2000.

Stanoycheva, a senior from Sofia, Bulgaria, posted an 8-0 record in regular season ACC matches at number six singles. She completed the regular season with an overall singles record of 20-16, and a 14-9 record in dual matches, and has won 13 of her last 15 dual matches. In doubles action, Stanoycheva and teammate Richele LeSaldo are 6-4 overall and 4-2 in conference matches.

Lacelarie, a freshman from Villeneuve-Les-Beziers, France, is currently ranked #31 by the ITA in singles. Lacelarie is 26-11 overall in singles, 17-5 in dual matches and 6-2 in ACC regular season matches. Lacelarie has defeated a number of ranked opponents this season, including #28 Marlene Mejia of North Carolina, #38 Delila Causevic of Maryland, #42 Anca Dumitrescu of Florida State, #50 Erica Perkins of Washington State and #59 Jaime Wong of Georgia Tech. She took #6 Agata Cioroch of Georgia and #7 Nataly Cahana of Old Dominion to three sets before falling to both players. Lacelarie dropped a 6-1, 6-4 decision to Kelly McCain of Duke, who earned ACC Rookie of the Year honors for the 2002 season. With teammate Laurence Jayet, Lacelarie is ranked #47 by the ITA in doubles. The duo has a 15-6 record in dual matches and a 5-3 record in ACC matches.