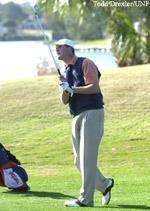 Both golfers had tied with scores of 275 for the four days. Trahan shot a one-under-par 71 on Sunday after rounds of 65-68-71 in the first three rounds. Trahan had a 17-foot birdie putt on the par five 18th hole to win the tournament, but he missed it by two inches, forcing a playoff. Durant had shot a 66 earlier in the day and had to wait for Trahan to finish.

Trahan won $540,000 with the victory and is now exempt on the PGA Tour for two years. He had won $474,242 all year entering the event, then more than doubled that total with the victory on Sunday.

Trahan and Durant had to play the par 5 18th hole three times to determine the winner. Both players birdied the hole the first two times, then Trahan made a five-footer for birdie and Durant made par, the third time around, giving Trahan the victory.

Trahan’s victory was the sixth by a former Clemson golfer. It marked the third consecutive year that a Clemson golfer had won a PGA Tour event. Jonathan Byrd won the BC Open in 2004, Lucas Glover won the Funai Classic in 2005 and Trahan won the Southern Farm Bureau Classic this year.