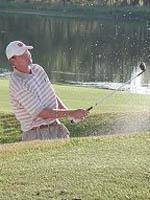 Former Clemson All-American D.J. Trahan won the Nationwide Tour’s Miccosukee Championship on Sunday at the Miccosukee Country Club in Miami, FL. He carded a final round 65 to finish at 268, two shots ahead of former college rival Nick Watney.

Trahan posted rounds of 68-67-68-65 in capturing his first professional tournament victory. His 65 on Sunday tied for his low round of the year and it was the low round of the day. The win moves him from 70th to 35th on the Nationwide Money list, qualifying him for the Nationwide Tour Championship in Alabama next week. A victory at that event will put Trahan on the PGA Tour in 2005.

Trahan’s round on Sunday included six birdies and no bogeys. He shot a 32 on the front nine, then made birdies on the 13th and 14th holes to take a one shot lead over Watney. The former Fresno State star then had a bogey coming in, allowing Trahan to win by two shots.

For the tournament, Trahan reached 79.2 percent of his greens in regulation, second best in the field. He also hit 80.4 percent of his fairways, recorded 19 birdies and just three bogeys. Trahan made just one bogey over his final 44 holes.

It was the third win by a former Clemson golfer on the Nationwide Tour this year. Earlier in 2004, Charles Warren won the Samsung Canadian and Cox Classics in consecutive tournaments that he played in. Warren is already qualified for the 2005 PGA Tour.

“I never put myself in a spot I couldn’t get out of,” said Trahan of his round on Sunday. “I was always in position to at least make a par. The shoot a 65 without a bogey on Sunday feels great.

“I have been hitting the ball well the last four or five weeks, but I just wasn’t scoring. Then I had a top 10 last week and it carried over to this week. Last week’s performance gave me the confidence to play well here.”