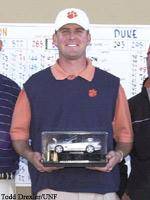 PONTE VEDRA BEACH, FL – D.J. Trahan tied a Clemson record with his fifth career victory after winning a three-way playoff in the Mercedes-Benz Collegiate Championship held at Sawgrass Country Club in Ponte Vedra Beach, FL, on Tuesday. Clemson finished second overall with an 862 (-2) behind Augusta State, who shot an 852.

Trahan came into the final round of the MBCC in 15th place, eight strokes behind North Carolina’s Dustin Bray at even par. All he did on the final day to close the gap was make six birdies and two eagles for a 67. Trahan performed a mad scramble on the back nine as he shot a 31 to get himself into a three-way playoff with Duke’s Ryan Blaum and Bray.

Trahan sunk a 25-foot birdie putt on the first sudden-death playoff hole, while Baum matched his effort with a birdie of his own. Bray’s birdie attempt from 12 feet slid by the hole and eliminated him from medalist contention.

Trahan finally closed Baum out with an eagle on the par 5 eighth hole. Trahan nailed his approach within five feet of the cup and buried the putt for the win. He joins former Tiger Chris Patton as the only Clemson golfers with five career victories.

Gregg Jones shot a 70 to finish 12th overall and Ben Duncan, the Tiger leader through the first two rounds, shot a 75 to finish 18th. Matt Hendrix shot a 75 and Jack Ferguson shot a 73 for Clemson.

Clemson made its first appearance in the 12-year-old event. Nine of the 15 teams in the field are ranked in the top 20 of the latest Golfweek/Sagarin rankings. It was the first tournament of the spring season for Clemson, ranked number-one in the nation in all three college golf polls.

The Tigers will next hit the links Feb. 23-25 at the Puerto Rico Classic.