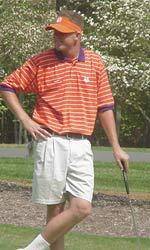 “That was as fine a round of golf as you will see at the amateur level,” said USA captain O. Gordon Brewer Jr of Trahan’s final round. “He picked the team up on his shoulders.”

Trahan’s round, which included five birdies, a bogey and an eagle, boosted the USA to a four-day total of 8-under-par 568 and a successful defense of the Eisenhower Trophy, which they won for the 12th time. Trahan, was 2-under-par at the turn, then eagled the par-5 13th hole and finished with birdies on the 17th and 18th holes to clinch the victory for the United States.

For the champions, 2002 U.S. Amateur champion Ricky Barnes shot 2-over-par 74 and helped the USA register a 4-under-par total of 140 on the final day.

Trahan’s 66 tied for the lowest individual score of the championship and was the second-lowest final round in 23 playings of the WATC. “He played very good golf. He holed many putts and hit good iron shots. His game was perfect,” said Eric Chaudouet of France, who played with Trahan.

France began the final round with a three-stroke lead over the USA but, according to their coach, the critical point was at the 14th and 15th holes. “We made a bogey on the 14th and didn’t hole our birdie putts on the 15th,” said French coach Anne Leconiat of their 5-under-par total of 571.

The USA, meanwhile, made two pars each on those key holes and did not lose ground. Trahan’s eagle on the par-13th, however, was another critical play, according to Brewer. “Prior to that it was nip and tuck,” said the USA captain.

The French runner-up finish was their highest in 23 times in the championship, besting their third-place ranking in 1992.

Heavy early morning rain and lightning activity forced a change in the championship format. Invoking a condition of play, the WAGC Championship Committee decided to implement a cut following the third round and limited play in the fourth round to the leading 20 teams. Play started at the first and 10th tees of the Palm Course at 10 a.m.

All teams in positions 21-63 did not play a fourth round and their final positions were determined by their total scores after 54 holes. Although no individual honors are awarded by the WAGC, it did recognize Marcus Fraser of Australia, who shot 7-under-par 281.