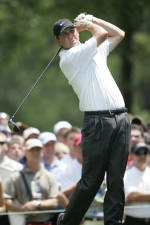 CLEMSON, SC – Former Clemson All-American D.J. Trahan finished 10th at the Deutsche Bank Tournament in Boston on Monday. Trahan finished with a 12-under-par score of 272 after rounds of 64-69-69-70.

It was a big weekend for Trahan in terms of honors. In addition to moving on in the PGA Tour’s FedEx Cup Playoffs, Trahan was inducted into the Clemson Hall of Fame at Memorial Stadium. He obviously could not attend the ceremony, as he was finishing up a third round score of 69 during the induction.

Trahan earned his sixth top 10 finish of the season with his performance in Boston and improved to number 36 in the FedEx Cup standings. The top 70 move on to this coming weekend’s tournament at Cog Hill near Chicago, IL. The top 30 after this weekend’s play move on to the FedEx Cup Championship in Atlanta in two weeks.