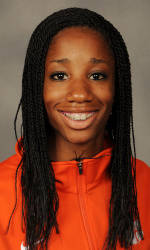 CLEMSON, SC – The Clemson track & field program added an outstanding freshman class to its 2011-12 roster for the men and women’s teams. Director of Track & Field Lawrence Johnson announced the addition of his incoming classes Friday.

“As each year passes, the goal is to make each recruiting class better than the last one,” Johnson said. “That’s how we try to keep our edge. A lot of other teams in the league and our region are recruiting well, but as long as we stay one or two athletes ahead of them, it will continue to give us a pretty good foothold here and beyond.”

The women’s team ushered in a small, but dynamic group of student-athletes. The headliners of the Tigers’ 2011 recruiting efforts are sprinter Dezerea Bryant of Milwaukee, WI and hurdler Keni Harrison of Clayton, NC. Harrison won national championships at the high school level as a senior in the 60 hurdles and 100 hurdles, and was a two-time All-American in the 400 hurdles as well. Bryant was a teammate of current junior sprinter Stormy Kendrick on the IAAF World Junior gold medal 4×100 relay in the summer of 2010. She had the No. 1 time in the U.S. this past winter in the 60-meter dash.

Caroline Bond (Johns Creek, GA) and Nia Fluker (Grand Prairie, TX) also signed with the women’s program after decorated prep careers. Bond, the younger sister of former Tiger pitcher William Bond (2004-08), set the Georgia state high school record in the pole vault as a senior in 2011. Fluker is a multiple medal winner at the USATF youth level and will compete in the 400 and 800 for the Tigers.

Three incoming female distance runners are on partial scholarship. Brianna Blanton (Summerville, SC) was a two-time AAAA state champion in the 800 meters. Sara Manesiotis (Hilton Head Island, SC) was all-state in the 1600 the past two seasons. Taylor Miller (Fort Mill, SC) won AAA state titles in the 800 and 1600 this past spring for Fort Mill High School.

The men’s team had one of its best signing classes in recent memory. The impact of the class could particularly be felt after football season, when two-sport athletes Mike Bellamy and Sammy Watkins join the team. Both have notified Johnson they intend to compete with the track team after football season. Watkins won the 200 dash at Florida’s AA state championship meet as a senior, while Bellamy won the 100 dash as a junior and the 200 as a sophomore in the Sunshine State.

Johnson and his staff added four jumpers in Jameel Abdul-Mateen (Covington, GA), Shai Carpenter (Mauldin, SC), C.J. Davidson (Central, SC) and Torian Ware (Crawfordville, GA). Abdul-Mateen is a former New Balance Indoor All-American in the triple jump. Carpenter won the AAAA state title in the triple jump in 2011. Davidson, who attended nearby D.W. Daniel High School, finished sixth at the 2011 New Balance Outdoor Nationals in the triple jump. Ware comes to Clemson with a personal best 7-foot clearance in the high jump after winning the class A state championship in Georgia this year.

The Tigers added a pair of hurdlers to the roster as well in Elijah Britton (El Paso, TX) and Jaron Roberson (Atlanta, GA). Britton will compete in both hurdle events, while Roberson is slated for the open 400 and the 400 hurdles as well.

Three distance runners were added on the men’s side. James Dwyer (Dunwoody, GA) won the 1600 at the Georgia Olympics in 2011. Kevin Ketner (Fort Mill, SC) was a four-time all-state performer in the 1600. Tim Tyler (Mt. Pleasant, SC) was third at the 2011 New Balance Indoor Nationals in the mile.

T.J. Christy joined the team in the throwing events. A native of Wauseon, OH, he was the state’s Division II champion in the discus as a senior with a mark of 172’5″. Christy was all-state as a junior in the shot put and discus as well.