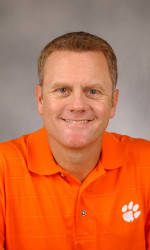 LUBBOCK, Texas – The Texas Tech Athletic Department has announced the hiring of Tom Stone as head women’s soccer coach. Stone comes to Tech from Clemson where he was an assistant coach for one season.

“I am very excited to bring my family here and to help build this program at Texas Tech,” said Stone. “When the opportunity to look at Texas Tech began, it became clear very quickly that the support that Texas Tech is giving women’s soccer really puts you in position as a coaching staff to make some good things happen. I think Gerald Myers (Athletics Director) and Judi Henry (Sr. Associate AD/SWA) were great in the hiring process. To be able to continue on with the foundation laid by Coach (Neil) McGuire, and help get Texas Tech on the soccer map is a challenge that is too good to pass up.”

“I want to thank Tom for the contributions he made to our program in his short tenure with our staff,” said Clemson Head Coach Todd Bramble. “College coaching was the only void on his professional resume and he began to fill that nicely here with us. While we would have liked to keep him longer, I applaud Texas Tech for recruiting a very good coach.”

“From the moment I arrived, to the moment I left, my experience at Clemson was first class,” said Stone. “I cannot thank Terry Don Phillips, Dwight Rainey, and Todd Bramble enough for giving me the opportunity to coach at a wonderful athletic department and women’s soccer program and experience ACC soccer. Clemson’s priorities are where they need to be. The Clemson family embraced us and it was an incredible year. You couldn’t have asked more of the season as Clemson went to the Final Eight in the NCAA Tournament. The future is bright for Clemson women’s soccer and I think Coach Bramble will carry the Lady Tigers deep in the NCAA Tournament for many years to come,” said Stone.

Prior to his stint at Clemson, Stone was the head coach of the Atlanta Beat of the WUSA for the three years of its existence from 2001-2003.

Stone was the first coach hired in the professional league. During his career with the Atlanta Beat, he led the 2001 team to the inaugural regular season WUSA championship, and had the best winning percentage of any coach in the WUSA. He concluded his career with the WUSA with the most wins, least losses and finished 13 games over .500. Stone was selected as the WUSA All-Star Game coach in 2001 and 2003.

Stone also worked as the Technical Director of the Top Hat Soccer Club in Atlanta, Ga. Top Hat is one of the top girls youth soccer clubs in the South region. He was also the head coach of the 2007 Gold Team that won the Georgia State Championship in 2004 and the Southern Regional Premier League in 2005.

Before his professional coach career, in 1991-2000, Stone served as the founding Director of Coaching at the Colorado Rush Soccer Club in Denver, Colo. His program had the most successful youth girls program in the United States from 1997-2000. Rush won 35 state cups, 12 Regional Championships and eight National Championships.

Stone played collegiate soccer at Duke from 1984-1987, and earned a bachelor’s degree in history. In 1986, Stone helped lead the Blue Devils to a victory in the National Championship. Stone scored the game winner in the 1-0 win over the Akron Zips. He was named All-ACC three times and served as the team captain in 1987. Stone set the Duke record for the most NCAA Tournament goals and in game winners for a single season.

After Stone played at the collegiate level, he went on to play professionally for Le Havre FC in France, the Washington Stars and the Colorado Foxes.

Stone was a three-year member of the U.S. Youth National Team and was a two-time Parade All-American at MacArthur High School in Texas.

Stone and his wife, Lindsey, have a seven-month-old son, Leyton.