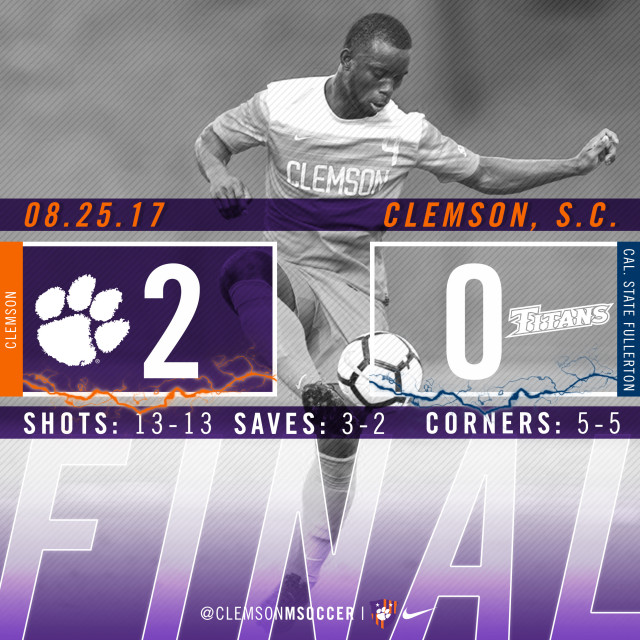 CLEMSON, S.C. – The No. 5 Clemson men’s soccer team defeated Cal State Fullerton 2-0 in the season opener on Friday night at Historic Riggs Field. For the sixth straight year, the Tigers have won their opening match.

The scoring effort for the Tigers was led by senior Jason Wright, who scored his first goal of the season and also his first goal in a Clemson uniform at the 17:33 mark. A Titan defender played the ball back to the keeper when he misplayed the ball allowing Wright to finish from inside the six-yard box. With no more scoring action in the first half, the Tigers would take a 1-0 advantage into the break.

At the 59:43 mark, freshman Robbie Robinson got in behind the defense when he was brought down in the box leading to the referee pointing to the spot for a penalty. Sophomore defender, Malick Mbaye stepped up to the spot and slotted home his first goal of the season giving Clemson a 2-0 lead. Cal State Fullerton put together some dangerous possession during the final ten minutes, but the Tigers defense held strong to open the season with a clean sheet.

“Overall it was a great team effort. It is always good to get a clean sheet in your opening match,” said head coach Mike Noonan. “We had plenty of opportunities, but we obviously would have liked to score some more goals. So overall I would say it was a good start to the season.”

The Tigers return to action Sunday, Aug. 27 at 6 p.m. as they host Radford at Historic Riggs Field.