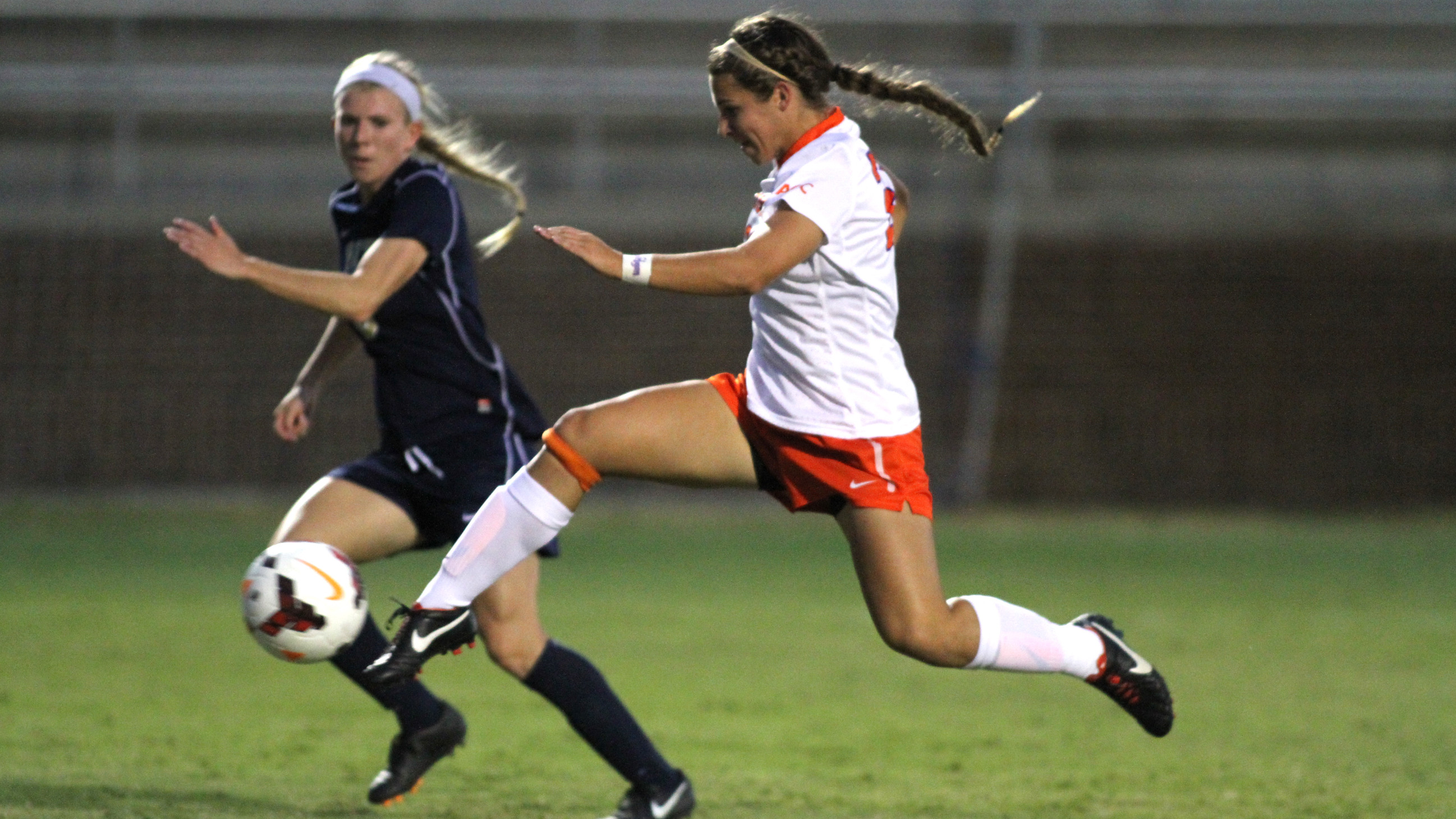 CLEMSON, SC – The Clemson women’s soccer team will take on its highest-ranked opponent to date when it plays host to third-ranked Florida State on Sunday, September 29 at 1 PM at Historic Riggs Field.  The game will be broadcast live on ClemsonTigers.com via ESPN3.  Score updates and other game information can also be found by following the Tigers on Twitter, @ClemsonWSoccer.

The Tigers are coming off a 1-0 win over Atlantic Coast Conference newcomer Syracuse Thursday night in Syracuse, NY.  Clemson improved its record to 6-2-2 (3-1 ACC) with the victory.  Sophomore midfielder Kylie Tawney recorded the lone goal for the Tigers in the 30th minute of play off a cross from junior midfielder Katelyn Reeve.  Senior midfielder Vanessa Laxgang is the leading scorer for the Tigers, with four goals and two assists for 10 points.  Freshman forward Catrina Atanda also has four goals, while freshman midfielder Tori Andreski has four assists to lead the team in that category.  Freshman goalkeeper Kailen Sheridan has allowed six goals and posted 24 saves in 875 minutes in the net for the Tigers.

Florida State, ranked third in the nation by the NSCAA and fifth by Soccer America, is 9-0-2 (4-0-1 ACC) on the season, most recently defeating in-state rival Miami 4-0 in Tallahassee on Thursday.  The Seminoles are led in scoring by redshirt freshman midfielder Berglind Thorvaldsdottir who has 12 points on the season via five goals and two assists.  Junior Dagny Brynjarsdottir has eight points on the season, to rank third on the team.  Together, the Icelandic duo has combined for 33% of all Seminole points.  Senior keeper Kelsey Wys has allowed just three goals and tallied 24 saves in 1035 minutes in goal for Florida State.

Clemson and Florida State have met 23 times on the pitch previously.  The Seminoles hold a 14-7-2 advantage over the Tigers including a 7-0 victory last year in Tallahassee when Florida State was ranked first in the nation.  The series is closer in Clemson, however, as the Seminoles lead by one game, 6-5, in games played at Historic Riggs Field.  Clemson is 5-2 at home this season, including wins in three straight and four of the past five contests.

Game Promotion:During halftime of Sunday’s game between the Tigers and Seminoles, Clemson will acknowledge area youth soccer teams by holding a parade of athletes similar in style to the World Cup Parade.  Teams will display their own “flags” in the parade, while being recognized by the Historic Riggs Field crowd.  Participating teams have the option of bringing their own team flag/poster or making one at the stadium at 12 PM, one hour prior to kickoff.  Admission is free for all, so come out and join Clemson women’s soccer for World Cup Day!