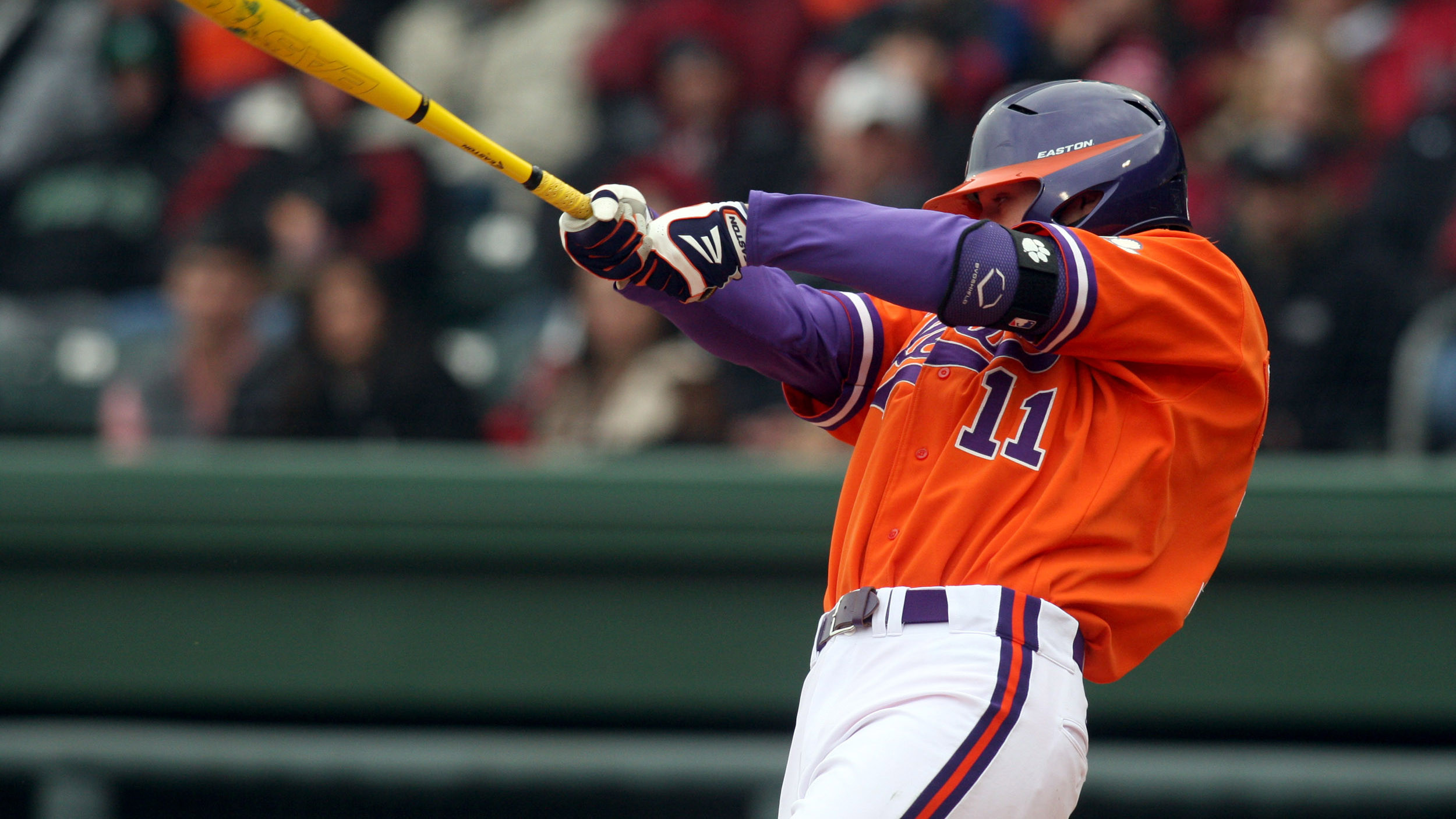 Tigers to Face Georgia Tuesday in Athens, Wednesday in Clemson

Clemson vs. GeorgiaClemson (15-8) will play Georgia (8-16) in a two-game, home-and-home series on Tuesday and Wednesday. The two teams will face off on Tuesday at Foley Field in Athens, then the two teams will match up on Wednesday at Doug Kingsmore Stadium in Clemson. Both games are scheduled to start at 7:00 PM.

The SeriesClemson and Georgia have met 222 times on the diamond, with Georgia holding a 118-102-2 lead in the series dating back to 1900. The two teams have played at least one game every year since 1959. Georgia is Clemson’s second-most-played rival in history, trailing only South Carolina (303).

Last season, the two teams split the home-and-home series, as the visiting team won each game. Clemson won at Georgia on March 27, 2012 behind 16 hits. Fifteen days later, the Bulldogs edged the Tigers 8-7 at Doug Kingsmore Stadium. Georgia rallied from a 5-0 deficit and scored six runs in the fifth inning. That Bulldog victory snapped Clemson’s five-game winning streak in the series.

The Starting PitchersIn game-one, Georgia will start sophomore righthander Luke Crumley (1-3, 7.85 ERA) on the mound. The Cleveland, GA native has made five starts and one relief appearance for a total of 18.1 innings pitched. He has allowed 29 hits (.367 opponents’ batting average) and two walks with 10 strikeouts.

The Tigers will counter with freshman lefthander Matthew Crownover (2-0, 3.57 ERA) on Tuesday. The Ringgold, GA native has made four starts and one relief appearance for a total of 17.2 innings pitched. He has surrendered 14 hits (.222 opponents’ batting average) and two walks with nine strikeouts.

Both teams’ starting pitchers for Wednesday’s game have yet to determined.

The BulldogsGeorgia, led by 12th-year Head Coach David Perno, enters the series against Clemson with an 8-16 overall record and an 0-6 SEC mark after being swept at home by Alabama last weekend. The Bulldogs, who have lost eight games in a row, are 7-10 at home and 1-6 on opponents’ home fields in 2013.

Georgia is averaging 5.3 runs per game and hitting .287 with a .398 slugging percentage and .356 on-base percentage thanks to 85 walks and 13 hit-by-pitches against 163 strikeouts. The team has also totaled 36 doubles, nine triples, 13 home runs, and six stolen bases in 15 attempts.

Curt Powell leads the team with a .400 batting average and 11 RBIs, Nelson Ward is hitting .359, and Kyle Farmer is batting .358 with a team-high 10 doubles and 26 RBIs. Brett DeLoach has added a team-high three home runs as well.

The pitching staff has a 4.79 ERA and .278 opponents’ batting average along with 155 strikeouts against 94 walks in 214.1 innings pitched. Sophomore lefthander Jared Walsh has two of the team’s three saves along with a 1.88 ERA and .174 opponents’ batting average in 14.1 innings pitched over nine relief appearances. Georgia, who has allowed 34 steals in 45 attempts, is fielding at a .976 clip as well.

The TigersClemson enters the series against Georgia with a 15-8 overall record and 5-4 ACC mark after defeating Duke twice in three games at home last weekend. The Tigers are 2-2 on opponents’ home fields and 12-6 at home in 2013.

The Tigers are averaging 5.2 runs per game and hitting .272 with a .359 slugging percentage and .337 on-base percentage thanks to 67 walks and 13 hit-by-pitches against 156 strikeouts. Clemson has also totaled 37 doubles, three triples, eight homers, and 33 stolen bases in 51 attempts.

The pitching staff has a 3.27 ERA and .259 opponents’ batting average in 209.0 innings pitched. The staff has allowed 70 walks against 153 strikeouts, good for a 2.19 strikeout-to-walk ratio. Junior righty Matt Campbell has four of the team’s six saves, while freshman lefthander Zack Erwin is 2-0 with one save and an 0.59 ERA in 15.1 innings pitched over nine relief appearances. The Tigers are fielding at a .970 clip as well.

Boulware Earns ACC Weekly HonorGarrett Boulware received ACC Co-Player-of-the-Week honors for his performance in five games from Mar. 19-23. It was the first time he won ACC Player-of-the-Week honors in his career. Boulware, who had multiple hits in four of the five games, went 8-for-16 (.500) with one homer, eight RBIs, three runs, and three walks to lead the Tigers to four wins.

Duggar Digging in in Right FieldFreshman outfielder Steven Duggar (Moore, SC) has been the everyday starter in right field this season. And there is good reason why. Besides the fact that he has been one of the team’s most consistent hitters, hitting safely in 18 of the 23 games, he has a team-high four outfield assists thanks to his strong right arm. He also has 52 putouts without committing an error.

Gossett Delivers Goose EggDaniel Gossett delivered against Duke at Doug Kingsmore Stadium on March 22 when he did what no Tiger had done since 2008…pitch a shutout. In 9.0 innings pitched, he gave up just five hits, no runs, and no walks with three strikeouts in Clemson’s 7-0 victory over the Blue Devils. He also retired the first 13 batters of the game.