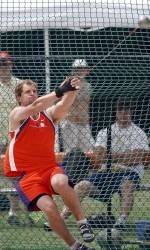 Tigers to Begin Competition at NCAA Outdoor Championships Wednesday in Eugene, OR

Fourteen Tigers Make Trek to Eugene Fourteen student-athletes from the Clemson track & field program – eight women and six men – will represent the school at the NCAA Outdoor Championships in Eugene, OR from June 9-12 at Historic Hayward Field. The meet will be at the University of Oregon, the same site that served as host to the U.S. Olympic Trials in 2008.

Clemson’s eight women have combined for 11 entries at the NCAA Championships. It is the nation’s fifth-highest total for the number of entries. Oregon’s women lead the way with 21 total entries for the meet that will be held at their home facility.

It is a record number of entries for the NCAA outdoor national meet for the women’s program The previous high was six (five individuals and one relay) in 2001 when Clemson produced its best national finish (T-7th).

The men’s program has six entries for the NCAA meet, including three student-athletes slated to compete in their first-ever national championship. The six entries is the most since Bob Pollock’s 2007 team had eight event participants.

Clemson’s action gets underway Wednesday with five events, starting with the heptathlon at 4:00 PM (Eastern). Liane Weber enters the competition with the NCAA’s No. 2 point value (5,928), but has not competed since suffering an injury following her record-setting ACC championship performance.

The decathlon will conclude Friday, starting at 1 PM. Also on Friday, Tiger graduate Zach Berg will embark on his first NCAA meet in the hammer throw.

Clemson’s NCAA Outdoor History Both the men and women have strong history as it pertains to the NCAA Outdoor Championships. The men’s program has finished in the top 25 at the national outdoor meet in 17 seasons, most recently 2008 under the late Bob Pollock.

The men’s team has had at least one national scorer at the NCAA Outdoor Championships every year since 1980. Clemson’s best outdoor finish was in 2002, when Pollock’s squad tied for fourth behind event runner-up finishes in the 100m, 200m, 110m hurdles and 4x100m relay.

The women will be seeking their first top-25 finish in eight years. Clemson has six top-25 finishes in its women’s track & field history, with a program-best seventh-place showing in 2001.

The Clemson track & field program has five NCAA outdoor national championships to its name, in terms of individual events or relays. The men have claimed three – Michael Green (100m, 1993), Duane Ross (110mHH, 1995) and Shawn Crawford (200m, 2000). The women’s 4x400m relay won the top prize in 2001, and then Jamine Moton won the hammer throw the following season.

Clemson Women in National Rankings The Clemson women’s team has been ranked among the nation’s top 20 since the third week of the outdoor season, which includes seven straight weeks heading into the NCAA Outdoor Championships.

The Tigers began the year unranked in the preseason list released by the coaches association Mar. 31 and have climbed to as high as No. 6, the week after winning the ACC Championship. Currently, the Tigers are eighth according to the USTFCCCA.

Four Athletes Make First NCAA Appearance Four members of the Clemson track & field program – including three athletes from the men’s team – will be making their first-ever appearance at an NCAA national championship meet this week in Eugene.

Included in the list of rookie performers is Xavier Tromp, who actually qualified for the NCAA Indoor Championships in March but was unable to compete due to injury. Tromp enters this week’s championship meet tied for third nationally with an 18’0.5″ clearance, which he accomplished in a runner-up finish at the ACC Championships in April.

The other men’s athletes making their first-ever trips to NCAA nationals are Jason Bell in 2006. Fowler hit a personal best 51’4.5″ and placed 11th at the East Prelims in Greensboro.

The lone female making her first trip to an NCAA Championships meet is Gastonia, NC native Stormy Kendrick. The impressive speedster qualified in two individual events – 100m and 200m dash – as well as with the 4x100m relay.

Kendrick ran second leg for the ACC champion relay team, and then helped the group to a season-best time of 43.70 and second-place finish at the East Preliminary Round two weeks ago. She is Clemson’s record-holder in the 100m dash and ranks among the top 10 in school history in the 200 as well. Kendrick was ACC runner-up in both individual events.

Sinkler is the only qualified athlete to earn All-America honors in more than one event. She was seventh in the triple jump at indoor nationals and 11th in the long jump. Mamona was the program’s highest finisher during indoor season, finishing runner-up in the triple jump. Six of the seven athletes earned their first-ever All-America certificate at the indoor meet. Weber was previously an All-American in the pentathlon after placing sixth at the 2009 meet.

Mamona Poised for Pursuit of NCAA Crown If Patricia Mamona’s performance at the NCAA Indoor Championships and last week at the East Prelims were any indication, the red-shirt junior appears poised to make a run at an individual national championship in the triple jump.

Mamona was indoor runner-up with a then personal best 45’5.25″. She then shifted her focus to helping the team achieve an ACC outdoor championship, competing in multiple events to maximize her point values.

With the ACC Championships behind her and her focus solely on the triple jump, she again put together an impressive series of attempts during the East Preliminary Round in Greensboro. She jumped at least 43’5″ on all six attempts, and landed a personal best 45’6.5″ to finish second and enter this week’s meet as the No. 2 seed.