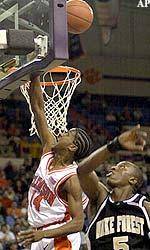 CLEMSON, S.C. – Josh Howard knew there were a lot of reasons why Wake Forest could have lost at Clemson on Tuesday night. But he had one very big reason the 17th-ranked Demon Deacons had to win at Littlejohn Coliseum.

“That game a year ago,” Howard said of Wake Forest’s double-overtime defeat against last-place Clemson in 2002. “I told the guys we didn’t want that to happen again.”

And Howard made sure it didn’t.

Wake Forest played for the third time since Thursday night. The Demon Deacons (14-2, 4-2 Atlantic Coast Conference) needed a late rally to win at Florida State, then had only one day to overcome sore muscles and tired eyes before busing to Littlejohn.

Through it all, Howard reminded his teammates of their disheartening loss here. He wasn’t much of a factor in the outcome, playing only 18 minutes and scoring just two points in the 118-115 defeat last season.

“I guess they wanted that more than we did then,” Howard said.

As the lone senior starter, Howard made sure his young teammates understood how he felt.

“Once we told them that, they went out and took care of business,” Howard said.

Vytas Danelius had a career-high 21 points and sophomore Taron Downey 18 points, including four 3-pointers, for the Demon Deacons.

Clemson hoped to take advantage of some weary legs and short-armed shots by Wake Forest. But after halftime, the Deacons showed why they’re the ACC’s second-leading offense this season and Howard is a candidate for league player of the year.

Edward Scott and Christie made consecutive 3-pointers with 5:10 left to bring Clemson within 66-52. But that’s as close as it got the rest of the way.

“I said before the season that I wouldn’t trade Josh Howard for anybody in the ACC. Now, I might not trade him for anybody in the country,” said Wake Forest coach Skip Prosser, who won his 200th career game in 10 years of coaching.

“We’re a young club and we need somebody to lead us,” Danelius said. “Josh has done a good job of that this year.”

The Tigers looked like a club on the rise when they opened the season 9-0. But they have lost five of seven since.

“We had not been knocked to the canvas yet this season,” said Clemson coach Larry Shyatt, in his fifth season since replacing Rick Barnes when he left for Texas. “But they really knocked us out in the second half.”

Scott and Christie each had 14 points for Clemson.

Downey and Howard combined for seven of Wake’s eight 3-pointers in the first half.

They each hit two from behind the arc after the Deacons missed their first five shots and had fallen behind 8-2 before the first media timeout.

By the time Downey rattled in his third 3-pointer with about five minutes to go before halftime, Wake Forest had recovered to lead 30-23. Howard’s third 3 in the half made it 35-28.

Howard walked off the court this time with a big smile on his face, waving to fans who called his name as the arena emptied. He was glad for the win, but knows the lessons learned might serve Wake Forest down the road in more important games.

“This might carry over to the NCAA tournament when you play two games in three days,” Howard said. “This is a little taste of what might happen. We had to step up to the challenge and we did it.”