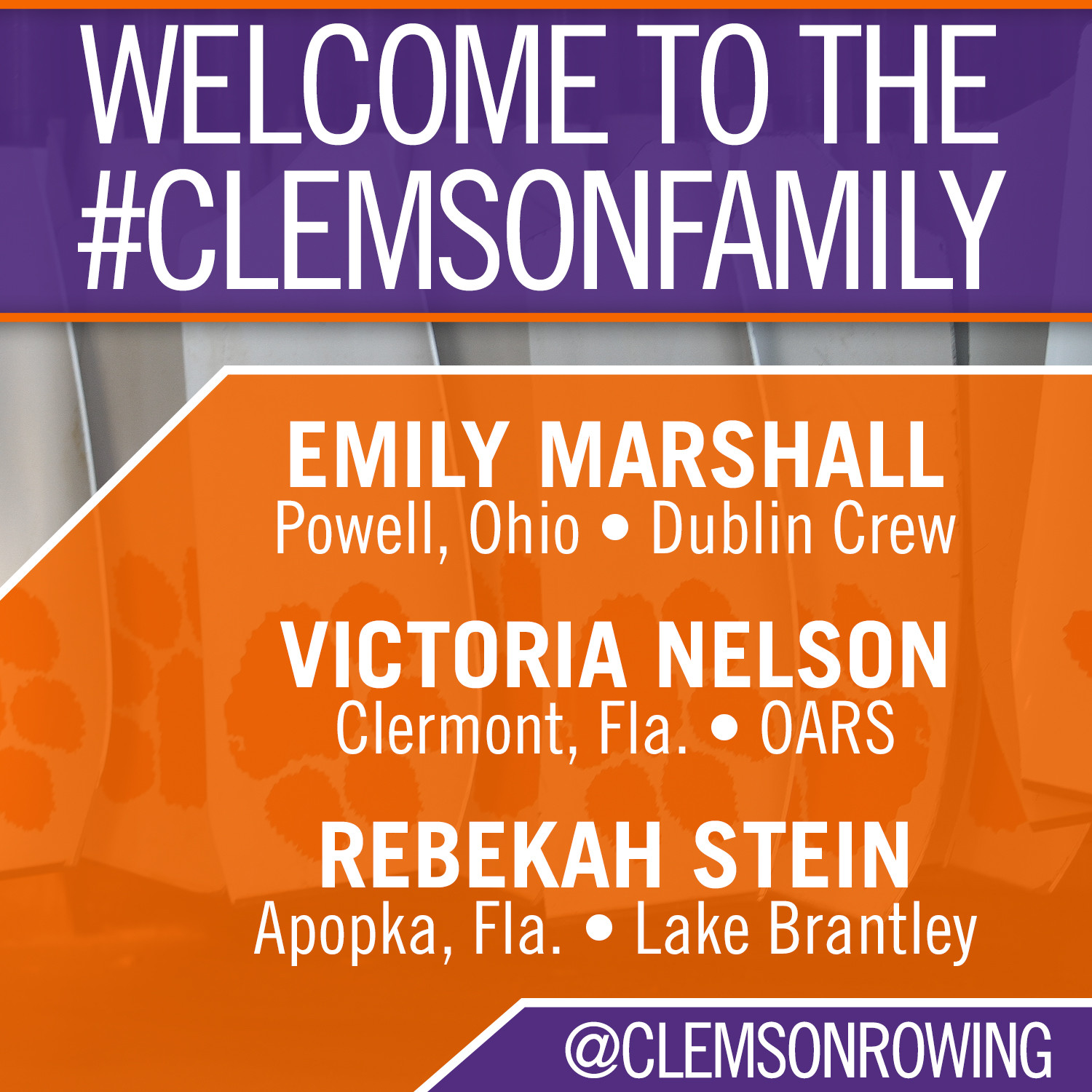 CLEMSON, S.C. — Stephen Frazier Wong has announced the addition of three student-athletes to his rowing program. Emily Marshall, Victoria Nelson and Rebekah Stein each signed National Letters of Intent (NLIs) with Clemson during the spring period.

“We are very excited about our freshman class,” Frazier Wong said. “We look for student-athletes who are academically driven that also compete and train at a high level, and these three do just that. Victoria, Rebekah and Emily combine with our fall signees — Isla McRae, Julia Meredith and Rachel Salvia — to bring great experience and drive that will help them succeed at Clemson.”

Marshall, who hails from Powell, Ohio, has been a mainstay in the fours with Dublin Crew over her high school career. In 2014-15, she helped the Women’s Youth 4+ to a bronze medal at the Cincinnati Invitational and to a 13th-place finish at the Head of the Charles. She also helped Dublin’s 1V4 to fourth place at the 2015 Midwest Junior Championships, and competed with the crew recently at the USA Youth Nationals in Sarasota, Fla.

“Emily excels on the water and in the classroom,” Frazier Wong said. “We’re looking forward to the potential she brings to make our team even better in both of those areas.”

“I chose Clemson because of its inviting atmosphere, the hard-working, inspiring and caring people, and because of the great opportunities I will have to excel academically and athletically,” Marshall said.

Nelson (Clermont, Fla.) is a former cross country runner that joined the Orlando Area Rowing Society (OARS) as a senior at South Lake High School. Nelson was a member of both the 1V8 and 1V4 this past year with OARS.

“Victoria has a tremendous capacity for hard work,” Frazier Wong said. “She is internally driven to perform and achieve at a high level.”

Nelson, a former triathlete who rowed for the first time in August 2014, signed an NLI after taking an official visit.

“I felt like I was home the first day I was there,” she said. “The visit got better and better and by the time I left, I knew Clemson was where I wanted to be. Clemson has my choice of career and the coaching staff was amazing! I cannot wait to start rowing at the collegiate level.”

Stein (Apopka, Fla.) was a four-year coxswain at Lake Brantley High School. This spring, she raced with Lake Brantley’s 1V8 and 1V4 boats. She also helped the 2014 Junior 8+ to first place at the FSRA State Championships, and by doing so the crew earned a spot at Scholastic Nationals.

“Rebekah is an experienced coxswain with strong leadership skills and a winning resumé,” Frazier Wong said. “We are excited to see her develop even further when she arrives at Clemson in the fall. Her knowledge in the coxswain seat will be a great asset to the program.”

Stein, a volunteer with Orlando Rowing Club in the summer and member of the Sunshine Club, was impressed with everything Clemson had to offer.

“I was attracted to Clemson’s strong academic programs, and the athletics department as a whole,” she said.