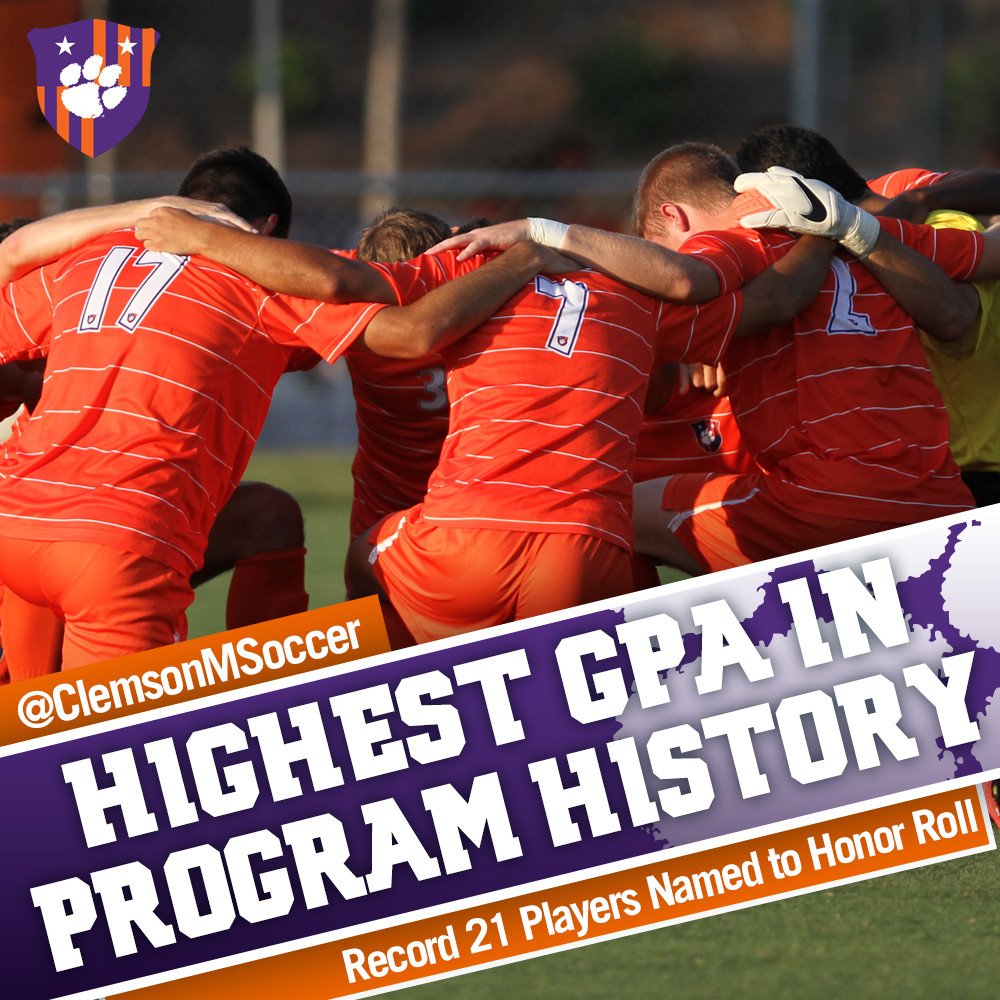 CLEMSON, S.C. – The Clemson men’s soccer team posted the program’s highest cumulative team grade point average on record during the spring 2015 semester. Overall, the Tigers broke three different program academic records during the 2014-15 school year, along with winning the 2014 ACC Championship and advancing to the NCAA Round of 16.

In addition to setting a new all-time best GPA in the Spring 2015 (and therefore, also setting the record for a spring semester), the Tigers posted a 3.07 team GPA in the Fall 2014, reaching their goal of at least a 3.0 and recording the highest team GPA for a fall semester in program history. Prior to the spring 2015 semester, the previous high was a 3.29 team GPA, achieved during the spring semester of 2001. The team was also awarded the Men’s Team Academic Award for the spring 2015, after posting the highest cumulative team GPA among all Clemson men’s programs for the semester.

“It’s been an amazing year and I’m incredibly proud of our players,” Head Coach Mike Noonan said. “A strong academic foundation and drive for success has become part of the championship culture of our program. Our players have the benefit of working with the staff at Vickery Hall, and our academic advisor Lindsey Ricketts, every day. They are the best in the nation at what they do.”

The Tigers also set a new program record when 21 of the 24 players on the roster achieved a 3.0 GPA or higher, earning each a spot on Clemson’s Honor Roll for the semester. The 21 players are the most the men’s soccer program has ever had on the Honor Roll in one semester. Five of those 21 players were named to the President’s List, which requires honorees to post a 4.0 GPA for the semester.

“To have 21 of 24 players named to the Honor Roll is a tremendous accomplishment,” Noonan added. “It’s a testament to the accountability and hard work of our players in maintaining the core values of our team, which begin with emphasizing education and pursuing excellence in all areas of our lives.”

In the midst of the most successful academic year in program history, Clemson won the ACC Tournament Championship, advanced to the NCAA Round of 16, finished the season with a 12-7-3 overall record including a 10-match unbeaten streak, and was ranked 11th in the nation in the final poll released by the NSCAA. Four players from the 2014 team are now playing professionally, with three on Major League Soccer rosters.

Ara Amirkhanian, who was a senior in 2014 and scored the golden goal in the ACC Championship title game against Louisville, was named a recipient of the ACC’s prestigious Weaver-James-Corrigan Honorary Scholarship, annually awarded to former student-athletes who wish to pursue a graduate degree following an undergraduate education and career. Amirkhanian will attend medical school in the fall.