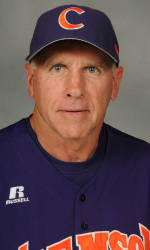 Sparked by home runs off the bats of John Hinson, Clemson combined for 10 runs in the third, fourth, and fifth innings to defeat Western Carolina 12-3 at Doug Kingsmore Stadium on Wednesday night. The Tigers improved to 16-12, while the Catamounts fell to 11-15-1.

With his 1,162nd career win, Jack Leggett moved into sole possession of 16th place on the all-time wins list by a head coach at a Division I school. In his 32nd year as a head coach, Leggett passed Bill Wilhelm and Norm DeBriyn (Arkansas) on the list on Wednesday. Wilhelm, who passed away on December 24, 2010, served as Clemson’s head coach for 36 seasons (1958-93) and hired Leggett to be his top assistant at Clemson for the 1992 and 1993 seasons after Leggett spent nine years (1983-91) as head coach at Western Carolina.

Scott Weismann (3-4), the first of six Tiger pitchers, earned the win. In 6.0 innings pitched, he scattered seven hits, one run, and one walk with five strikeouts. Clemson’s six pitchers combined to allow just three of the Catamounts’ 16 baserunners to score in the game.

Western Carolina starter Adam Curtis (1-2) suffered the loss, as he gave up six hits, five runs, and no walks with two strikeouts.

The Catamounts grabbed the game’s first lead in the top of the third inning. Cameron Dullnig led off with a single through the right side and Luke Gragg followed with a ground-rule double down the right-field line on the next pitch. Two batters later, Ross Heffley grounded out to third to plate Dullnig.

After Clemson’s first seven batters of the game were retired, Clemson dented the scoreboard in the bottom of the third inning. Stolz reached on a one-out, infield single and advanced to second when shortstop Aaron Attaway’s throw was errant. Addison Johnson reached on another infield single to second to move Stolz to third, then Brad Miller lined a 1-2 pitch to right field for a single to score Shaffer, giving Clemson a 5-1 lead.

In the fourth inning, Hinson led off with a walk, stole second, and scored on Stolz’s two-run homer down the left-field line, his first long ball of the season.

Clemson kept the pressure on in the fifth inning. Jeff Schaus led off with a walk, but he was erased on Shaffer’s fielder’s choice. Shaffer moved to third on Miller’s single to left-center, then Miller stole second. The catcher’s throw to second went into centerfield, allowing Shaffer to score and Miller to advance to third on the error. Chris Epps followed with a sacrifice fly to left field to plate Miller. Hinson gave the Tigers double-digit runs when he crushed a long solo homer to right field, his third home run of the year.

Hinson and Mike Dunster led off the eighth inning with walks, then pinch-hitter Jon McGibbon moved the runners up a base on a groundout to first. Pinch-hitter Joe Costigan struck out, but he reached first and Hinson scored on a wild pitch on the play. Pohl followed with a sacrifice fly to center to score Dunster.

Stolz led Clemson’s 10-hit attack by going 2-for-3 with a two-run homer and two runs. Miller went 2-for-4 with an RBI, while Pohl added a game-high three RBIs. Hinson scored a game-high three runs as well. The Tigers were 6-for-11 with runners in scoring position and left just four runners on base in the game.

Dullnig went 3-for-3 with two runs and a walk to lead the Catamounts, who also totaled 10 hits in the contest. However, Western Carolina was 1-for-13 with runners in scoring position and stranded 11 runners on base.

Clemson will host Maryland at Doug Kingsmore Stadium in a three-game series beginning Friday at 6:30 PM.