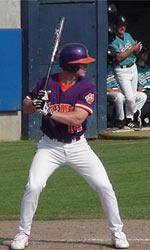 CLEMSON, SC — Khalil Greene homered in his last at-bat to tie a school record as Clemson defeated South Alabama 11-3 on Sunday afternoon at Doug Kingsmore Stadium. Clemson (14-1) bounced back from its first loss of the year to take two of three games from South Alabama (12-9).

Greene ended a two-out rally for the Tigers in the eighth inning by homering to left field off of Jag reliever Bert Heath. It was the fifth consecutive game Greene hit a home run, tying a school record held by Matthew LeCroy (1996) and Michael Johnson (2001). The senior ended the day 3-4 with three RBIs and is currently on a 12-game hitting streak.

Steve Reba (5-0) had another strong outing for Clemson. The righthander pitched 7 and 1/3 innings, allowing only one earned run while striking out eight. Clark Girardeau (5-2) got the loss for South Alabama.

South Alabama took an early lead when T.J. Touchstone hit the first pitch of the game down the left field line for a double and then came home on Erik Smallwood’s base hit. Clemson answered with two runs in the bottom of the inning. L.J. DeMaino’s lead off walk was followed by a double to center by Kyle Frank, who scored later in the inning off of Michael Johnson’s groundout.

Greene hit an RBI-single in the third inning and the Tigers posted a pair of runs in the fourth and fifth. Jeff Hourigan cranked a two-run home run to right field to give Clemson a 5-1 advantage. In the fifth inning, Jeff Baker and Greene scored after Jarrod Schmidt struck out and reached base on a throwing error by Jaguar catcher Shane Scoville.

South Alabama scored an unearned run in the sixth inning and chased Reba in the eighth with a run. But Clemson dashed any hopes of a comeback with a four-run eighth that included a two-RBI double by Frank and Greene’s home run.

The Tigers will host UNC-Asheville on Tuesday night at 7:15 PM.