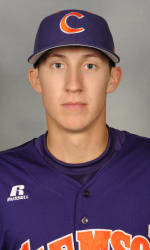 The pitchers’ duel saw the Blue Devils strike first with single runs in the sixth and seventh inning after the Tigers squandered several scoring opportunities in the first five innings. However, Clemson loaded the bases with no outs in the eighth inning and Baum lined an opposite-field double to right-center to give Clemson the lead for good. Duke threatened in the ninth inning, putting two runners in scoring position, but Daniel Gossett induced a groundout to end the game.

Tiger starter Kevin Pohle (4-1) pitched 7.0 strong innings to earn the win. He allowed just four hits, two runs, and one walk with four strikeouts. Gossett recorded his second save of the year by pitching 2.0 scoreless innings of two-hit ball with two strikeouts. Pohle and Gossett combined to face just six batters over the minimum.

After the Tigers were unable to score any of their seven baserunners in the first six innings and Pohle retired the first 15 batters of the game, Jordan Betts led off the sixth inning with a double off Baum’s glove in left field. Betts advanced to third on Grant McCabe’s sacrifice bunt, then Angelo La Bruna lined out to center to score Betts on the sacrifice fly.

Clemson, who left two runners on base in the third, fourth, and fifth innings, got a one-out single to right-center from Spencer Kieboom in the top of the seventh inning, then Jason Stolz walked on six pitches. Steve Wilkerson grounded out to first in a close play to advance the runners up a base. But the Tigers left two more runners on base when Thomas Brittle flied out to center to end the inning.

The Blue Devils added to their lead in the bottom of seventh inning. Andy Perez led off with a walk on six pitches and Mike Rosenfeld lined an 0-2 pitch to center for a single. After both runners moved up a base on Will Piwnica-Worms’ sacrifice bunt, Mark Lumpa grounded a single through the right side to score Perez. But Rosenfeld was thrown out at the plate by right-fielder Brad Felder to keep the Tigers within two runs.

Richie Shaffer led off the eighth inning with a single to center, then Phil Pohl grounded a single through the left side to extend his hitting streak to 11 games. Jon McGibbon followed with a walk after being down in the count 0-2 to load the bases with no outs, then Baum came through with a double to right-center to score all three runners and give Clemson a 3-2 lead. Baum, who had two career RBIs prior to that plate appearance, drove in three runs on the double. Felder’s groundout moved Baum to third, then Kieboom lined out to right-center to plate Baum on the sacrifice fly.

In the ninth inning, Perez grounded a one-out single through the left side, then Rosenfeld flied out to left field for out #2. Piwnica-Worms followed with a double down the right-field line to advance Perez to third. With the potential tying run on second base, Lumpa grounded out to Gossett to end the game.

Kieboom led Clemson’s nine-hit performance by going 3-for-3 with a sacrifice fly. Shaffer and Brittle added two hits apiece for the Tigers, who struck out just once in the contest. Wilkerson went 0-for-4 with a walk, as his 19-game hitting streak came to an end.

Six different Blue Devils had one hit apiece for Duke, who had six hits in the game. Lumpa and La Bruna had one RBI apiece as well.

Clemson will travel to Greenville, SC to take on Furman at Fluor Field on Tuesday at 7:00 PM.