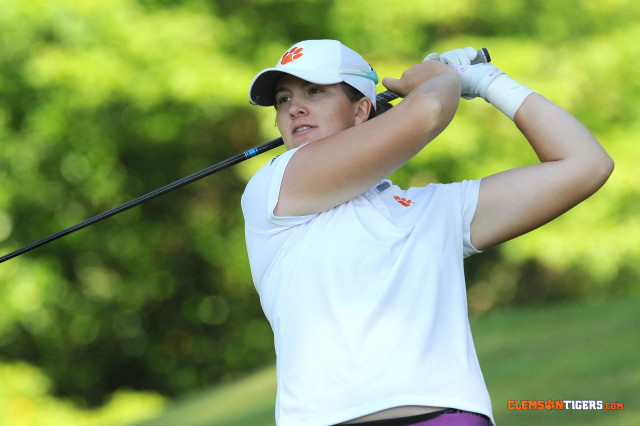 Clemson, S.C.—Clemson’s women’s golf team will play host to the Third Annual Clemson Invitational at The Reserve at Lake Keowee this coming weekend, March 23-25. The 15-team field will play 18 holes a day, Friday through Sunday on the par 72 course that was designed by Jack Nicklaus.

The national field includes five teams from the Big 10, three from the SEC, two from the ACC and one from the Big 12. Fans will be able to watch some future professionals, as nine of the top 50, and 17 of the top 85 players in the nation according to the latest Golfweek/Sagarin rankings will be in action.

Clemson is ranked 30th by Golfweek and is coming off two solid performances, a victory at the Houston-Dickson in February and a sixth-place finish out of 13 teams at the Sun Trust Gator Invitational in Gainesville, Fla.

All seven players on the Clemson roster will play for Kelley Hester’s team or as individuals. The Tigers are led by Alice Hewson, a two-time All-ACC player who has a 71.94 stroke average and three top 10 finishes in her seven events so far this year. She finished 14th at the Houston-Dickson and 13th at the Sun Trust Gator. Hewson had an eighth-place finish at the Clemson Invitational with a 215 total (-1) last year.

Ana Paula Valdes has the second best stroke average on the team so far this year at 73.00. The sophomore from Mexico has two top 10 finishes and six under-par rounds. She was a big part of Clemson’s victory at the Houston-Dickson with a sixth-place finish.

Sydney Legacy has a pair of top 25 finishes in her career at the Clemson Invitational. The senior from Lexington, SC has a 74.00 stroke average and has finished sixth and 13th in her last two events, respectively.

Kennedy Swann was Clemson’s top player at the Houston-Dickson with a second place finish and she has a 74.93 stroke average this year. She is tied for the team lead in rounds in the 60s with four. Two of those have come in her last four rounds.

Marisa Messana is a graduate student with a 76.65 stroke average this year. The native of Florida is in her fourth year as a starter and the Clemson Invitational will be her 37th career tournament, more than any other Clemson women’s golfer pst or present. She is a three-time Academic Scholar and had a 4.0 GPA for her undergraduate career.

Ashley Czarnecki and Calista Rice also will be in the tournament for the Tigers as individuals.

Admission is free and live scoring will be available on golfstat.com. Pairings will be announced later in the week.