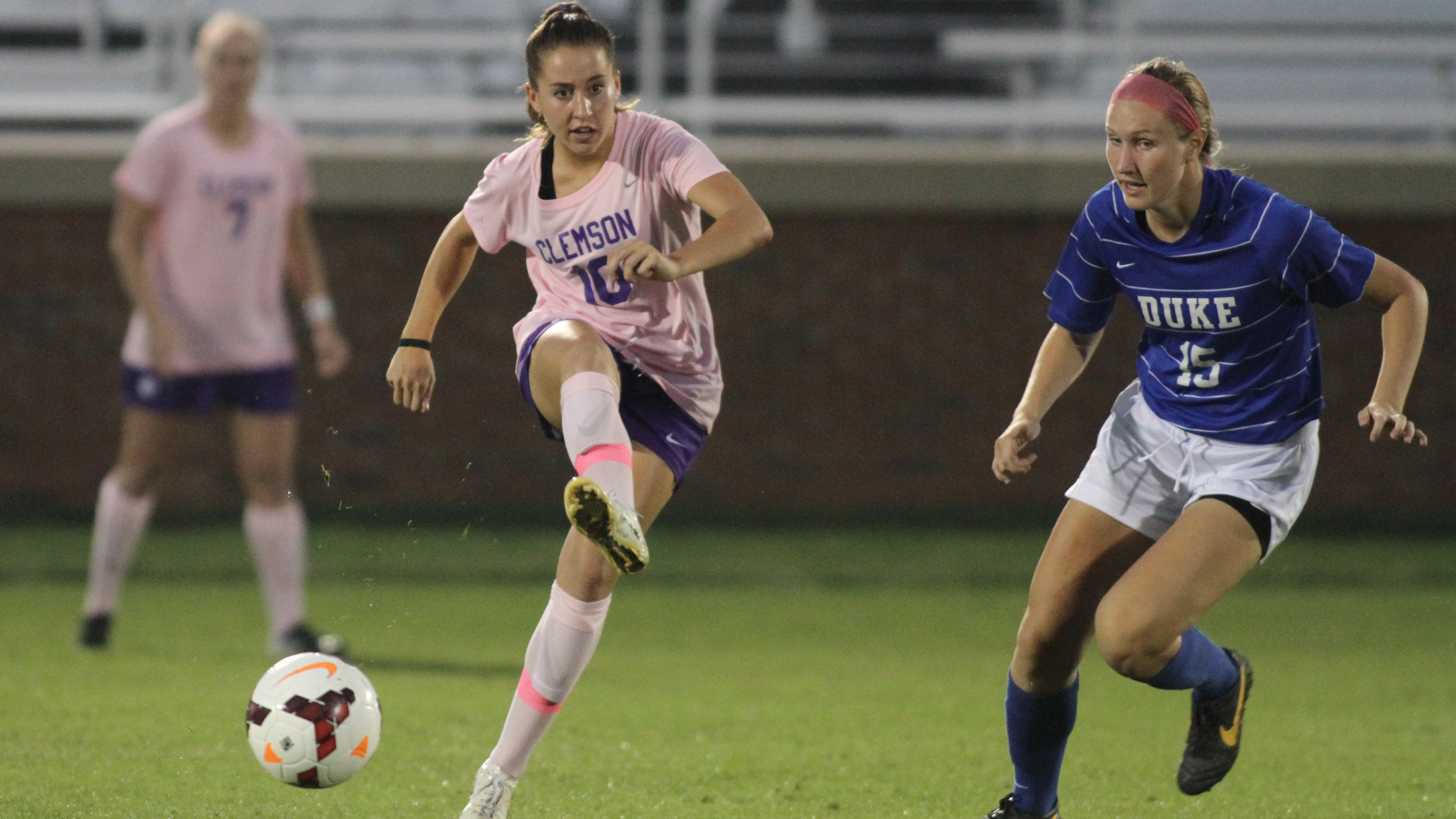 CLEMSON, SC – The Clemson and Duke women’s soccer teams played 110 minutes of scoreless soccer resulting in a 0-0 tie on Thursday night at Historic Riggs Field.  With the draw, Clemson moved to 7-4-4 overall (4-3-2 ACC) and Duke moved to 5-6-4 overall (2-4-3 ACC), with each team earning one point towards its standing in the Atlantic Coast Conference.

“I am extremely proud of this team,” said head coach Eddie Radwanski.  “We dominated the first half.  We dictated the tempo and we controlled possession, which is impressive against a team like Duke.  However, Duke is a good team, they have good players up front and we knew they would not give up.  We knew they were going to challenge us on offense at some point, and they did in the second half.  Overall, it was a good battle, a good ACC game.  We came away with a point and we protected our home field.  We continue to take steps forward and I am pleased with that.”

The Tigers actually did put the ball in the net early in the game, however, the goal was called off by an offsides call.  The play occurred in the 10th minute, when senior Tabitha Padgett sent the ball into the box from the left side looking for freshman forward Paige Reckert.  Reckert and the Duke defender scrambled for the ball and it deflected to the right to sophomore forward Jenna Polonsky.  Polonsky put the ball on the ground from 10 yards into the right side of the net, however the goal was nullified a few seconds later when the whistle was blown indicating that she was offsides.

While Clemson dominated play in the first half and Duke put together more offense in the second half, statistically the game was as even as it could possibly be as the Tigers and Blue Devils had the same totals in all major statistical categories.  Each team fired 10 shots at its opponent while keepers Kailen Sheridan and Meghan Thomas made two saves apiece.  Each team also had two corner kicks and recorded seven fouls.

Polonsky led the Tigers in shots with five, including one on goal, while sophomore midfielder Kylie Tawney also fired one shot on goal for Clemson.  Sheridan recorded her seventh solo shutout in goal for the Tigers.  Entering the game, she ranked third in the ACC in that category.

The Tigers will return to Historic Riggs Field on Sunday, October 20 when they play host to 19th-ranked Wake Forest.  The game, which will kick off at 2 PM, will be televised on RSN and will also be broadcast on ESPN3.